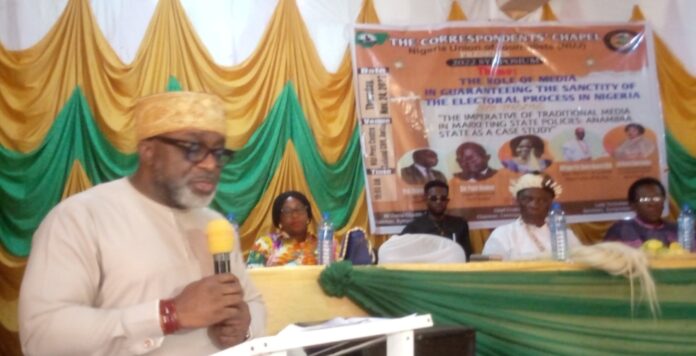 Nigerian media organisations have been urged to give equal access to all politicians and political parties in the electoral process as the country prepares for the 2023 general polls.

Prof. Obiora Okonkwo, Chairman of the United Nigeria Airways, made the call on Thursday in Awka while delivering a lecture at a symposium organised by the Correspondents’ Chapel of the Nigeria Union of Journalists (NUJ), Anambra Chapter.

The theme of the lecture was “The Role of the Media in Guaranteeing the Sanctity of the Electoral Process”.

Okonkwo, a chieftain of the Peoples Democratic Party (PDP), said the situation where media organisations report events according to the bias of their owners was not healthy for the polity.

He said more than any other sector, media houses were most uniquely placed to drive the process of national rebirth and renewal, including helping to sanitise the political system.

“The mass media are considered the lifeblood of any democratic system of government; a responsibility that is constitutionally enshrined in many countries of the world, including Nigeria.

“Some key roles of the media in elections coverage include helping voters to make informed choices by providing critical information that enhance their knowledge of electoral processes.

“Observing very high ethical standards of professionalism by complying with ethical codes of practice on election reporting and placing the public good and national interest over selfish and parochial ends,“ he said.

He said the media were also required to eschew partisanship by granting equitable access to all parties and candidates contesting the elections, including marginalised groups with limited financial capacity.

Okonkwo called for the protection of journalists in the course of duty as enshrined in the constitution of Nigeria, noting that politicians needed the media for publicity, exposure and legitimacy while the media needed politicians as source of news and revenue.

He expressed regrets at the poor reward system in the media industry, noting that most journalists were not paid while some had their salaries withheld for a long time.

Okonkwo cautioned against attack on people with opposing political views, saying their opinions were their rights under a democracy and should be respected.

“As media professionals, you have an enormous opportunity and responsibility to help sanitise our electoral process, as well as change the current trajectory of governance in Nigeria.

“Evidently, many of the challenges of the mass media in Nigeria are structural and inextricably linked with the broader society.

“Put differently, media owners and professionals are not exogenous to Nigeria’s many challenges, many even argue that the media are very complicit in the situation the country finds itself in,” he said.

In his keynote speech, Chief Paul Nwosu, Anambra Commissioner for Information, said that the traditional media were still critical in contemporary society.

Nwosu said the Gov. Chukwuma Soludo and the media were partners in the Anambra project and that the state was relying on the Fourth Estate of the Realm in marketing government policies.

On his part, Chief Emmanuel Ilozue, Chapel Chairman, said the theme of the symposium was to highlight the role of the media in the upcoming elections.

Ilozue said the members of the chapel would continue to discharge their duties responsibly and diligently.

The Royal Father of the Day was Igwe Victor Awogu, the traditional ruler of Ossamala Kingdom and a member of Nigeria Guild of Editors.