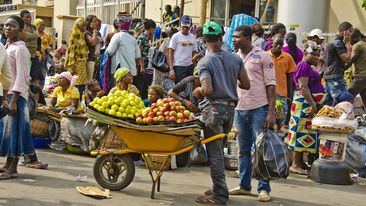 According to the report, the growth rate declined from 4.03 per cent in the third quarter of 2021.
The NBS said the reduction in growth was attributable to the base effects of the recession and the challenging economic conditions that had impeded productive activities.

” This performance is higher when compared to the third quarter of 2021 which recorded aggregate GDP of N45,113,448.06 million, indicating a year-on-year nominal growth rate of 15.83 per cent.”

In its latest National Multidimensional Poverty Index report launched on Thursday, the NBS said that 63 per cent of Nigerians were poor due to a lack of access to health, education, living standards, employment and security.

The Statistician-General of the Federation and CEO of the NBS, Semiu Adeniran, said this was the first time the bureau would conduct a standard multidimensional poverty survey in Nigeria.

He added, “Unlike the Global MPI which uses three dimensions (Health, Education and Living Standards), we added a fourth dimension, Work and Shocks in the 2022 MPI Survey. This fourth dimension as well as other added variables such as food security, water reliability, underemployment, security shocks and school lag, were all added to reflect the current realities and priorities in Nigeria.”

The 133 million poor Nigerians recorded by the NBS exceeded the World Bank’s projection for Nigeria in 2022.

The World Bank, which said that poverty reduction stagnated since 2015 under the regime of the President, Major General Muhammadu Buhari (retd.), projected that the number of poor Nigerians would hit 95.1 million in 2022.

This projection was made in its report titled, ‘A Better Future for All Nigerians: 2022 Nigeria Poverty Assessment.’

The report had read, “The COVID-19 crisis is driving up Nigeria’s poverty rate, pushing more than five million additional people into poverty by 2022. With real per capita GDP growth being negative in all sectors in 2020, poverty is projected to have deepened for the current poor, while those households that were just above the poverty line prior to the COVID-19 crisis would be likely to fall into poverty.

“Were the crisis not to have hit (the counterfactual scenario), the poverty headcount rate would be forecast to remain virtually unchanged, with the number of poor people set to rise from 82.9 million in 2018/19 to 85.2 million in 2020 and 90.0 million in 2022, due largely to natural population growth.

The rising poverty also defies the government’s plan to life 100 million Nigerians out of poverty in 10 years.