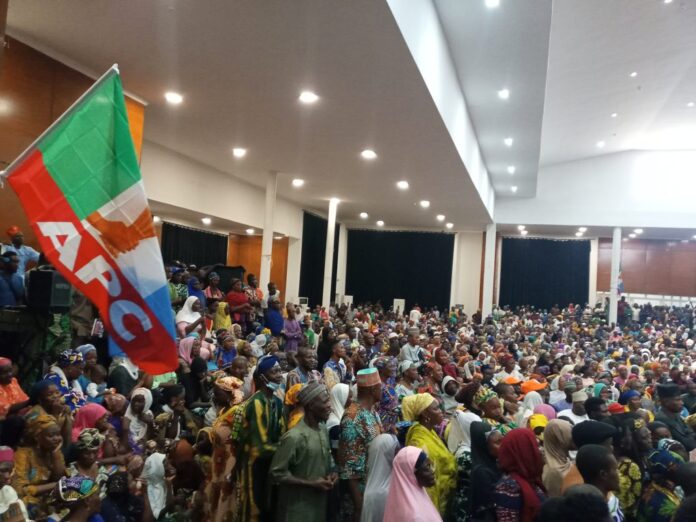 By Afusat Agunbiade-Oladipo
Ilorin, Nov. 24, 2022 No fewer than 10,000 defectors from opposition political parties have joined the ruling All Progressives Congress (APC) in Kwara Ilorin.
Naija247news reports that the defectors were led by dozens of erstwhile chieftains of the People’s Democratic Party (PDP), Social Democratic Party (SDP) and African Democratic Congress (ADC), among others.
The defectors were received on Thursday in Ilorin by Gov. AbdulRahman AbdulRazaq.
The governor was assisted by several top government officials and party chieftains, including the state APC Chairman, Mr Sunday Fagbemi; and Director General of the APC Campaign team, Alhaji Yahaya Seriki.
The big fishes among the defectors included a former Deputy Dpeaker of Kwara House of Assembly under PDP, Mr Mathew Okedare; and former Commissioner for Tertiary Education under PDP, Mr Abdullahi Alikinla.
Others are former Commissioner for Education, Science and Technology, Mr Musa Yeketi; and Personal Assistant to the former Gov. Abdulfatah Ahmed on Political Matters.
The defectors took turns to attest to the impressive performance of the present administration in the areas of education, healthcare, workers’ welfare, rural-urban infrastructural development, women and youth empowerment.
Receiving the defectors, AbdulRazaq congratulated them for their bold decision and assured them of fairness and equal treatment.
The governor listed some of his administration’s scorecards across sectors and enjoined the APC members to remain resolute to deliver the state at the 2023 polls.
Fagbemi, on his part, said Kwara people have all seen the huge gap between the past and present administrations in terms of inclusive growth and good governance, and have vowed never to allow the state to go backward.
He said the comeback bid of PDP was evil and targeted at denying the citizens what they are already enjoying under AbdulRazaq, restating the government’s scorecards across sectors.
On his part, the Director General of Kwara APC Campaign Council, Alhaji Yahaya Seriki, urged members of the party to remain determined to work for the success of the party.
The defectors explained why they left their parties to embrace APC, describing AbdulRazaq as an architect of a new Kwara.
Okedare said they never knew that they were in darkness under the PDP-led administration until recently, attesting that AbdulRazaq has demonstrated the capacity to lead.
Yeketi said what the present administration has achieved within three and a half years were enough to prove that AbdulRazaq meant well for the state