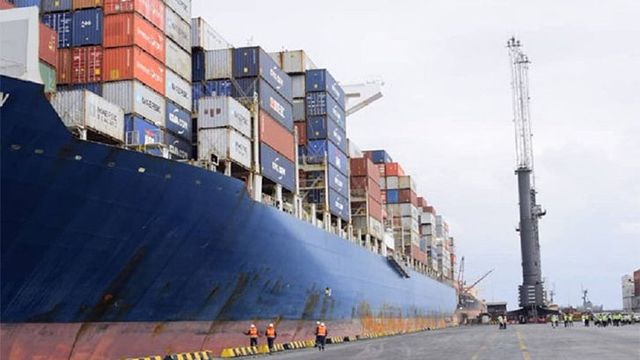 Lagos, Nov. 22, 2022 The Nigerian Shippers Council (NSC) says it will continue to work tirelessly to ensure enhanced transportation and trade facilitation for the economy to optimise the potential of the blue economy.

Jime spoke on the topic, “High seas to Hinterland – Opportunities and Challenges in Harnessing the Blue Economy.”

Naija247news reports that blue economy is sustainable use of ocean resources for economic growth, improved livelihoods and jobs, while preserving the ocean ecosystem.

He noted that the council would further ensure the implementation of various government policies under its supervision to ensure that the nation maximised the opportunities in the port sector to optimise blue economy.

“To ensure seaports are well connected to the hinterland and the country benefits maximally from the abundant benefits in the blue economy; particularly in seaport and shipping sector, there is need for adequate provision of critical infrastructure.

“The Federal Government should ensure full automation of port processes and procedures to ensure seamless cargo handling and clearance at the seaports for onward delivery to the hinterland.

“There should be implementation of the single window to facilitate seamless cargo handling and reduce multiplicity of functions of government agencies at the ports,” he said.

The shippers council boss called for the provision of rail connectivity to major seaports in the country to ensure seamless cargo evacuation and reduction of cargo dwell time at the ports.

He emphasised on the establishment of more deep seaports capable of attracting high volume capacity vessels, which would in turn reduce freight cost and improve the country’s connectivity.

“There is need for the promotion of barge operations for cargo evacuation to and from the seaports to the hinterland.

“Promotion and full implementation of Cabotage Act to encourage and protect indigenous participation in barge operations in Nigeria,” he said.

He added that there was also need for the development and operationalisation of more critical transport infrastructure such as the Inland Dry Ports (IDPs) and Vehicle Transit Areas (VTAs) to facilitate trade to the hinterland and neighbouring countries.

He noted that unfortunately, the country’s ports did not operate for 24hrs, adding that this should be encouraged.

He pointed out the need to encourage and promote private investment in the maritime industry.

Also, contributing, Mr Oluwadamilola Emmanuel, General Manager, Lagos State Waterways Authority (LASWA), noted that LASWA was concerned about the adverse effects of whatever that came from the high sea to the inland waterways.

According to Emmanuel, LASWA operates an integrated transport system and not just water transportation and such is looking at issues wholestically.

“We have set up an inland waterway command and control centre and the idea is to gather data, monitor activities on the waterways to help with security,” he said.

Also Dr George Moghalu, Managing Director, National Inland Waterways Authority (NIWA), pointed that a robust seaport interconnectivity should be a matter of priority to take advantage of the blue economy.

According to Moghalu, the issue of interconnectivity has the challenge of infrastructure and should be tackled.

He said the key components that could be gained from blue economy were fishing, coasts tourism, aquaculture, ship building and repairs, waste disposal management, among others.