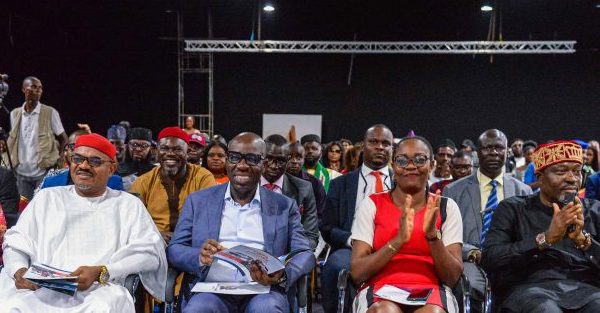 Gov. Godwin Obaseki and some AGN members at the event

Edo Government has expressed willingness to collaborate with the Actors Guild of Nigeria (AGN) to build a world class film village in state.

Gov. Godwin Obaseki of Edo stated this on Tuesday, while addressing members of the guild at the 2022 Nollywood Actors Summit, which took place from Nov. 21 to Nov. 22 at the Victor Uwaifo Creative Hub in Benin.

The summit with the theme, “Impact of Digital Technology on the Acting Profession”, drew some of the notable Nollywood stars like Joke Silver, Kanayo O. Kanayo, Destiny Etiko, Lancelot Imaseun, Nobert Young and Eucharia Anunobi, among others to Benin.

Obaseki said the film village would be sitting on a-30 hectares of land, adding that it would be connected to 24 hours electricity supply from the Ossiomo power.

The governor noted that the government was at the final phase of completing the design.

He said the government would sign agreement with the guild towards finalising the designs and all the studies that were required to attract investment.

“We will like to move to a stage where we can sign Memorandum of Understanding with the guild so that they can support us as we finalise the designs.

“And all the studies that are required to enable us attract investment into what I can promise you to be the first of its kind, a world class film village in Nigeria.

“I urge the guild particularly, the independent film makers to embrace all the offers the state government is giving them to think of acting and producing their films in the state,” the governor said.

Obaseki, however, promised to provide incentives such as accommodation, transportation, locations, security and other logistics to enable free flow of production for those willing to act and produce movies in the state.

“In the past one year, over 30 Nollywood movies have been produced and acted in the state, while during the first Benin international film festivals organised by the state, over 100 entries were received from over 50 countries,” he said.

Rollas noted that the establishment of the standard creative hub proved that culture and tourism was one of the major cardinal areas of reform agenda of the governor.

He said the hub would fast track the socio-economic development of the state and would complement the fascinating tourist attractions in the state.

He noted that the hub was already attracting big film studios and reputable filmmakers in Nigeria, adding that the guild would also help to propel the immediate acceptance and accelerated growth of the creative hub.