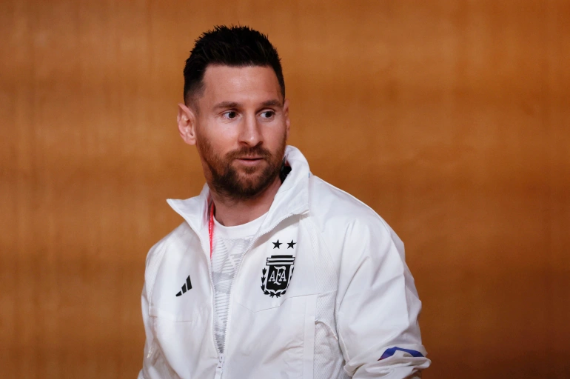 ‘ Argentinian captain Lionel Messi has said he is in a great place physically and mentally on the eve of his team’s Group C opener against Saudi Arabia on Tuesday, in what is likely to be his last World Cup.

Messi had caused alarm over the weekend by failing to show up for a scheduled team training open to the media. He trained individually on Friday and Saturday because of what the Argentinian football federation described as “muscle overload”.

Fitness concerns had raised questions about whether Messi would play the full 90 minutes against Saudi Arabia, but he played those concerns down when making a rare appearance at a news conference on Monday.

“I feel very good physically, I think I’m in a great moment, both personally and physically and I don’t have any problems,” Messi said.

“I heard that they said I trained differently. It was because I had a knock but there is nothing strange [happening]. It was just a precaution,” he said.

Argentina’s Lionel Messi during training.
Argentina’s Lionel Messi during training in Wembley Stadium, London, United Kingdom in 2022 [File: Peter Cziborra/Reuters]
The Argentina captain cut a remarkably relaxed figure ahead of Tuesday’s game against Saudi Arabia in Doha, as he repeatedly stressed how much he was enjoying football as his glittering career enters its final chapters.

The 35-year-old, playing his fifth World Cup in Qatar, added that he did not prepare differently for the tournament, which for the first time is being played in November and December.

“I didn’t do anything special,” he said.

“I took care of myself and worked as I have done all my career, knowing that this is a special moment, as this is probably my last World Cup, my last chance to achieve this great dream that I have, that we all have.”

On a 36-match unbeaten run, Argentina opens their group stage against Saudi Arabia, the second lowest-ranked team at the tournament.

It seems like an ideal chance for Messi to push his international goals tally towards a century — he currently has 91 — in what is surely a forlorn attempt to catch the leading men’s mark of 117, owned by great rival Cristiano Ronaldo from Portugal.

Messi might not be needed for too long against Saudi Arabia.

The Saudis might have come through the Asian qualifying rounds relatively comfortably, but they tend to struggle on football’s highest stage, reaching the last 16 just once in their five appearances at the World Cup.

They started the 2018 World Cup tournament with a 5-0 loss to host-nation Russia.

Then again, Argentina opened the World Cup in 2018 with a disappointing 1-1 draw with tiny Iceland — in a match which saw Messi have a penalty saved — that immediately put pressure on the Albiceleste.

Messi is looking to finally win the World Cup to boost his standing as arguably football’s greatest-ever player.

“It’s most likely my last World Cup,” he reiterated, “my last opportunity to make my — our — dream a reality.”

By playing against Saudi Arabia, Messi will become the first Argentinian player to play in five World Cups, one more than Diego Maradona and Javier Mascherano.

Under French Coach Hervé Renard, the Saudis have been in preparation for several weeks after domestic competitions were paused so players could focus on the World Cup.

“It was very positive,” Renard said on Monday.

“It was very important to hear from our leader prior to leaving for such a great competition,” he said.

“We haven’t come to this World Cup just for a jolly. We have come here to be the best we can. We hope all the Saudis in the stadium will be proud of us, that is the most important thing.”