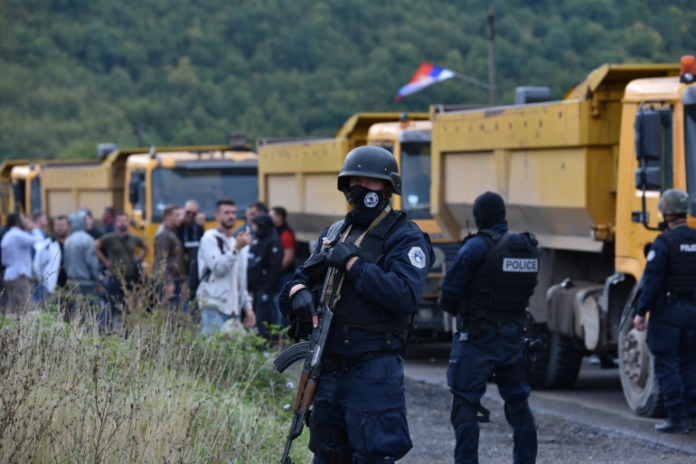 The European Union’s foreign policy chief has warned of “escalation and violence” after emergency talks between Kosovo and Serbia failed to resolve their long-running dispute over car licence plates used by the ethnic Serb minority in Kosovo.

“I think that there is an important responsibility on the sides of both leaders for the failure of the talks today and for any escalation and violence that might occur on the ground in the following days.”

Kosovo has attempted this year to require its Serb minority to change their old car plates that date before 1999, when Kosovo was still part of Serbia, matching Serbia’s earlier ban on Kosovo licence plates.

Serbs in the northern part of the country have resisted, sometimes violently, but Kosovo has said it will start issuing fines from Tuesday.

‘Sleepless nights are ahead’
Borrell said an EU proposal could have avoided increased tensions, but while Vucic accepted the proposal, Kurti did not.

He added that he would inform the EU member states of the two countries’ “lack of respect for their international legal obligations” and warned that, given their commitment to joining the bloc, they should act accordingly.

“I now expect Kosovo to immediately suspend further stages related to the re-registration of vehicles in north Kosovo,” Borrell said, adding that he asked Serbia to suspend issuing new license plates with acronyms of Kosovo cities.

Kurti, meanwhile, blamed Borrell for focusing solely on the licence plates instead of the full normalisation of ties between Belgrade and Pristina.

Sign up for Al Jazeera
Week in the Middle East

Catch up on our coverage of the region, all in one place.
Sign up
By signing up, you agree to our Privacy Policy
“I am ready to come back and talk based on the same agenda: final agreement on fully normalising ties, which at the centre has the bilateral recognition, and other current issues of different character, like the case of the number plates,” Kurti told reporters. “One cannot do without the other.”

But Vucic said the Kosovan leader was responsible for the failure of the meeting.

“Sleepless nights are ahead of us,” he warned.

Kosovo special police stands as hundreds of Kosovo Serbs protest against a government ban on entry of vehicles with Serbian registration plates in Jarinje, Kosovo
Kosovo has attempted this year to require its Serb minority to change their old car plates that date from before 1999 when Kosovo was still part of Serbia [File: Laura Hasani/Reuters]
NATO, US call for calm
Hundreds of police officers, judges, prosecutors and other state workers from the Serb minority in Kosovo quit their jobs this month after the government in Pristina ruled that local Serbs must finally replace car plates issued by Northern Kosovo Serb municipal authorities loyal to Belgrade, with Kosovo state ones.

NATO, which still has about 3,700 peacekeepers stationed in the former Serbian province to prevent violence between ethnic Albanians and Serbs, said on Monday that “escalation must be avoided”.

The United States also called for both sides to exercise restraint.

State Department Spokesperson Ned Price said Washington joined the EU “in calling on Kosovo to immediately suspend any planned measures that would escalate tensions, including the imposition of vehicle fines”.

The dispute over licence plates has stoked tensions for almost two years between Serbia and its former breakaway province, which declared independence in 2008 and is home to a Serb minority in the north backed by Belgrade.

The declaration of independence came a decade after a war between ethnic Albanian fighters and Serbian forces that killed 13,000 people, mostly ethnic Albanians.

Serbia, supported by its allies Russia and China, does not recognise the statehood of its former province but most Western countries do, including the US.

Some 50,000 ethnic Serbs who live there refuse to recognise Pristina’s authority and still consider themselves a part of Serbia.