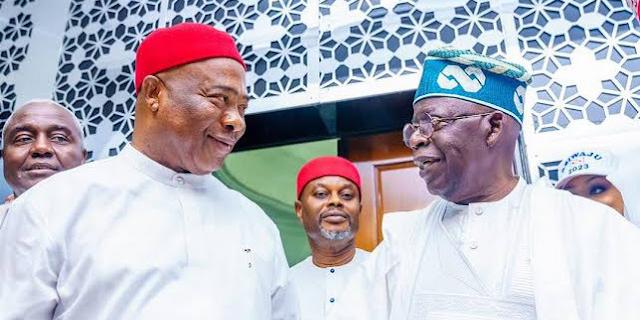 …Unveils APC programme of action, assures zone of inclusiveness in his govt

The Presidential Candidate of the All Progressives Congress (APC), Senator Bola Ahmed Tinubu has told South East business and political leaders to ignore Governor Hope Uzodimma of Imo State at their own peril based on the latter’s visionary leadership and wisdom.

Tinubu spoke in Owerri onThursday at a town hall meeting with South East private sector drivers that included manufacturers, investors, traders, entrepreneurs, artisans, among others, as well as some political leaders drawn from the APC.

Apparently surprised at the calibre of personalities drawn from the business community in South East who filled the expansive hall of Landmark Event Centre in Owerri, Tinubu could not hold back his feelings of Governor Uzodimma as a leader with the capacity to galvanise and organise human resources to achieve result.

He expressed delight in what he saw in Owerri and therefore called on Nigerians to join hands with him and the APC to bring prosperity and renewed hope to the country by massively casting their ballot for his Party.

Tinubu called on all people of goodwill to “vote for progress and to be part of the nation’s golden future and never to allow those who put the country backwards in 16 years to come back again.”

The APC Presidential candidate who asked all to align themselves for the best hope that will be best for the South East region and all the regions of the nation, noted that “knowledge drives the economy and the economy moves the government to success and development.”

He assured his audience that he has come to deliver on good governance in Nigeria.

He challenged his audience to take the courageous steps, believing that they can do it as what is required is a change of mindset and determination.

Tinubu emphasized that Nigerians have the resources and the capacity to move forward as against incessant lamentation.

The former Governor of Lagos State told the South East business and political leaders alike that he can guarantee that his government at the centre will comprise people across the country, “who will come together to discuss the grievances of the country and how to overcome them.”

Tinubu reiterated that he and his team are “coming to serve the people and not to be their boss,” that he has “brought progressive governance and forward-looking government and not the type that will take Nigerians backwards.”

He noted that the host Governor, Uzodimma, is “an encouragement to the Party which stands for the renewal of hope for the Party.”

Tinubu encouraged the business community to continue to support him because when he assumes office he will create an enabling environment that will make their businesses more prosperous.

“We will develop a code that when activated will make their goods and services easy on the roads of Nigeria.”

Furthermore, he promised “to work with the Progressive Governors of APC to walk the road of Renewed Hope.”

Tinubu assured his audience that he will “establish Industrial Hubs throughout the nation and encourage productions in Owerri and Aba and open up opportunity to bring international commerce in all the regions of Nigeria.”

For example, he added that the Ports that will connect the railway lines of Port Harcourt to other business corridors will be more lucrative.

In rounding off, Asiwaju said he has come to “change the dynamics of the inefficiencies that have been affecting the potentials of industrial growth and availability of electricity and industrialization in Nigeria,” even as he said under his watch, religion will remain a personal decision of Nigerians.

In his welcome remarks, the Governor Uzodimma who is also the APC Campaign Coordinator for South East said the reason for the town hall meeting was for members of the public consisting of investors, entrepreneurs, small and medium scale income earners among others, to interrogate some of the challenges and issues they have been facing in their businesses, such that provisions would be made in the APC candidate’s manifesto.

He described the town hall meeting as a brilliant opportunity and an idea bought by the Presidential Candidate of APC “who ordinarily could have sat at his comfort zone and send probably hired Consultants to come to the South East and find out what their problems are.”

Uzodimma said: “But in his wisdom, he decided to come himself to meet with Imolites and the South East in general to know what the issues are and present his manifesto and what he intends to do for them and at the same time, listen to them, collect whatever they have said as their challenges and include them in his programmes and policies for his government come 2023 as President of Nigeria.”

He expressed his happiness and thanked the people of South East, the private sector drivers and members of APC in particular for coming out en mass to listen to their Presidential candidate.

The Governor seized the opportunity to thank Tinubu and he assured him that “having listened to the presentation in Lagos and having gone through the manifesto without much ado,” he is “certain and sure that the presidential candidate will no doubt capture what the issues and problems of Nigerians are.”

Governor Uzodimma expressed confidence that Tinubu as President will be ready to go the work, emphasizing that “the town hall meeting initiative is timely and very reassuring.”,

The Governor said: “It is indeed a very good opportunity for all the entrepreneurs, the Nigerian Chambers of Commerce and Industry, the Traders Association and even to Middle and Low Income ones, to listen attentively, make their inputs and get assured replies.

“Imo is APC compliance and I enjoin all to come together and support the Party. The APC Presidential candidate is like driver that is properly licensed. With him there won’t be accident.”

Addressing the audience, the National Chairman of APC, Senator Abdullahi Adamu said he came as a witness to what the stakeholders meeting of businessmen and women with their Presidential candidate in the South East will do with the interface.

He described the meeting as “strategic one because it is organized for a unique people the business group who are the major drivers of the nation’s economy.”

In his remarks, the Director General the APC Presidential Campaign Council and Governor of Plateau State, Simon Lalong said the APC meeting “provides a very unique opportunity for the presidential candidate of Asiwaju Ahmed Tinubu and his Vice, Senator Kashem Shettima, to further break down the content of the manifesto for the New Hope Renewed.”

He expressed happiness that members of the private sector, traders associations, etc came out in their numbers to engage the Presidential candidate, insisting that “the meeting provides the platform for the business class to put across their ideas for a better Nigeria of tomorrow.”

He reminded the audience that the private sector plays a very important role for the economy of a nation and serves as the largest employers of labour and job creation mechanism.

He therefore charged members of the private sector to seize the rare opportunity and table their challenges and demands as well as listen to the presentations of the presidential candidate.

Lalong thanked Governor Uzodimma for hosting the meeting on behalf of the entire South East APC and wished all a successful outing.

In his goodwill message, the Governor of Ebonyi State Engr. Dave Umahi challenged Tinubu to use his office as president to correct the anomaly of “why since after the war in 1970 the South East has not been able to occupy certain positions,” as well as “addressing the issues constraining the businesses of the people of South East in Nigeria.”

Umahi concluded that the Governors of APC in the South East have great confidence inTinubu and that “Nigeria needs a businessman that will transform the economy of Nigeria to lead them.”

Presenting their unique problems, the Coordinator of the Small and Medium Scale Enterprises (SMSEs), Barr. Emeka Mgbudem said going through the Manifesto the business communities have a lot of future in the government of Tinubu.

He however, on behalf of his business colleagues, made a humble request that Tinubu, on assuming office, should help to dismantle the several checkpoints in the South East, help to restore good roads, electricity and access to the seaport that will guarantee ease of doing business.

He noted that “when this is achieved, the businessmen and women, especially South East will actualize their potentials to the fullest.”

In their different messages, the former Governor of Imo State, Chief Ikedi Ohakim, Chairman, Imo State Christian Association of Nigeria, Rev. Dr. Divine Eches Divine, the former Deputy Governor of Anambra State, Dr. Nkem Okeke and the Majority Whip in the House of Representatives, Hon. Nkeiruka Onyejiocha, all expressed their profound support to the Presidential Candidate of APC and assured Tinubu that they didn’t make mistake in choosing him as their candidate for the elections in 2023.

Onyejiocha in particular said that Tinubu has already assured women of 50 per cent participation in his government and promised that Nigerian women have already taken the campaign to the grassroot and have accordingly procured their PVCs to vote for him.