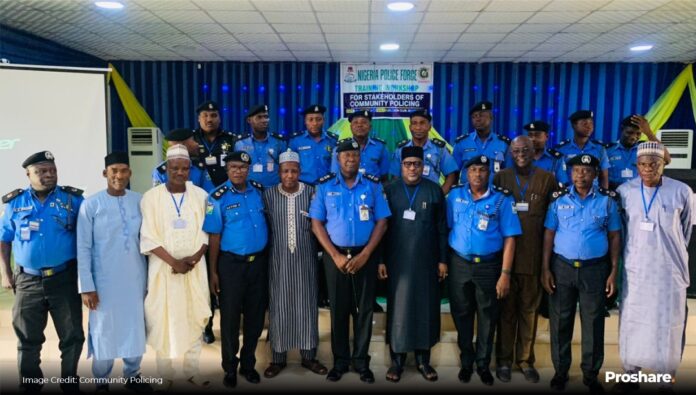 Based on a Thisday news report, The Nigerian Police is organising training workshops for community policemen across the six geo-political zones of the country.

He said the participants will serve as a focal point for the police in their different communities but in accordance with the new electoral law, none of the members of the said community police officers will be allowed to participate in the election process.

Earlier this year, former President of Nigeria, Olusegun Obasanjo noted that the creation of state police would be a better option than community policing.

This, he said in response to the alarming level of increase in the spate of insecurity in the country in recent years. From attacks, kidnappings of school students, banditry along major highways, and killings by insurgents to Fulani Herdsmen/indigenous community clashes, living in most regions of the country has become a nightmare.

Travelling along many routes in Nigeria has also become unsafe, and many attribute the inability to effectively deal with the situation to the inadequate number of security personnel.

The challenge of inadequate security personnel led to the formation of regional security agencies, such as the Amotekun security outfit of the Southwest region.

Based on reports, the activities of the Amotekun have helped complement the efforts of the conventional security agencies.

The decentralisation of the Nigerian police force to allow for state policing has been widely suggested as a solution to the incessant security problems in the country especially as it appears the federal police force is unable to effectively deal with the challenges.

The existence of state police is also in line with the constitutional provisions for states that each of the states constituting Nigeria should run autonomously with its powers to make laws, enforce them and punish offenders through the judiciary.

We agree with former President Olusegun Obasanjo that state policing is a better option than community policing.

Critics of the idea of state policing however fear that it will take us back to the era of native police in pre-1966 Nigeria when absolute powers were given to local authorities, and politicians of that era recklessly used such powers for selfish political gains.

Many fear that the creation of state police might jeopardise the unity of the country, encourage secession, create funding challenges for some states that are already facing severe funding problems and lend itself to abuse by state governors, among others.

In our view, the country is at a crossroads, and a critical analysis of the benefits of state policing must be balanced against the problems it may cause. What is clear, however, is that the status quo is not working.