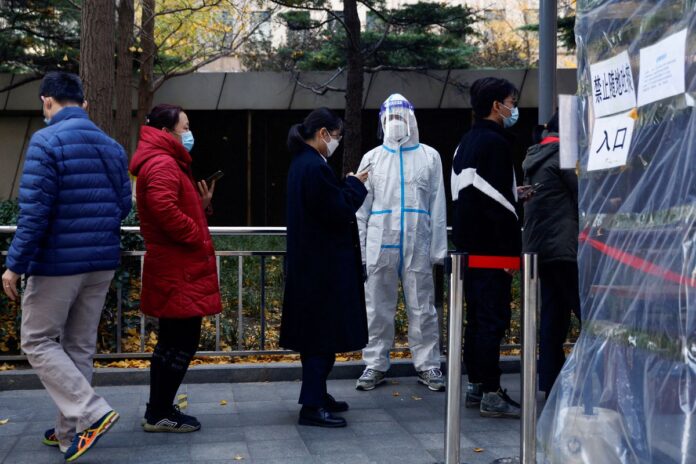 NEW YORK, Nov 17 (Reuters) – China is likely to post real gross domestic growth (GDP) of 4.5% next year, largely due to the country’s gradual exit from its zero-COVID policy that could lead to a rise in consumption, Goldman Sachs wrote in a research note on Thursday.

China is battling coronavirus outbreaks in numerous major cities, including the capital Beijing, while it takes steps to try to ease the burden of its strict zero-COVID policy, which has caused severe economic damage and widespread frustration nearly three years into the pandemic.

Advertisement · Scroll to continue
Goldman assumes that China will end its COVID policy in the second half of next year, with higher consumption expected to contribute to two-thirds of full-year GDP growth target. The bank has penciled in real GDP growth of 3% this year.

Net exports, which have propelled China for most of the pandemic era with more than $1.9 trillion since 2020, is expected to be a “modest growth drag” next year, given slowing global demand and ongoing supply chain diversification away from China, the U.S. investment bank said.

Overall, Goldman pointed out that the “coast is far from clear” when it comes to China’s long-term growth path, citing a likely “prolonged property market deleveraging process”, supply chain issues, including bans of advanced technology exports to China from the United States.

In the stock market, Goldman said it sees a “strong prospect that the market could stage a recovery rally sometime in 2023,” after a challenging two years.

Goldman said the earnings drag from the housing market could ease somewhat, while the market could get a boost from expectations of reopening after the pandemic.

Consumer sectors, particularly those sensitive to reopening, could become profitable again for the first time since 2019 after seeing their revenue drop to the 2012 levels, the bank said.