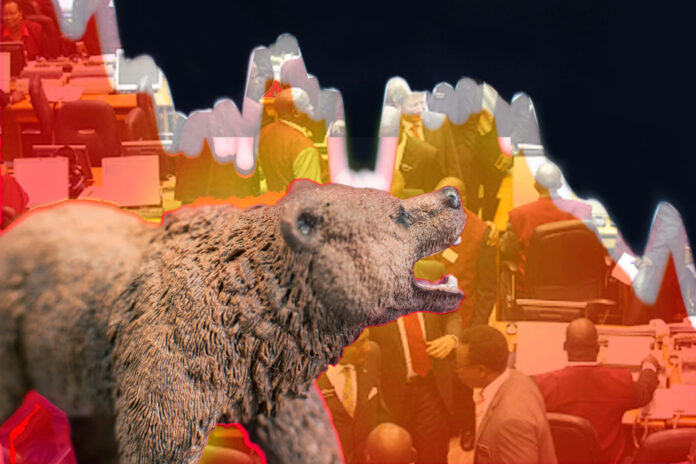 The momentum in the local equities this week and was bearish and buoyed by pressured sell-offs and price declines in some of the large and mid-cap companies within consumer goods, industrial goods and oil and gas sectors respectively.

Despite the bullish close in 4 of the 5 sessions this week, bearish sentiments pervaded activities which drove the benchmark index southward by 0.68% week on week to 43,968.75 points as investors continue seeking for safer havens for their investments in the face of rising and attractive yields in the fixed income market.

Equally, the grip of the bears held the market capitalization by 0.68% week on week to N23.95 trillion which resulted in the loss of N163.64 billion which was wiped out from investors’ pocket as the market year to date (YTD) return moderated to 2.93%.

On the back of waning investors’ sentiments in the week, gains were recorded from the price appreciation witnessed in tickers such as GUINNESS (-10%), FLOURMILL (-10%), JBERGER (-10%), CADBURY (-10%) and MULTIVERSE (-9%) respectively, while the sectorial performance was downbeat with 4 out of 5 sectors tracked closing the week in the bearish region safe for the NGX Banking Index (+0.17%) which emerged as the lone gainer for the week.

Elsewhere, the level of trading activities in the week was varied as the total traded volume dipped by 21.9% w/w to 1.10 billion units while the total weekly traded value inched northward by 7.30% week on week to N11.71 billion and then the total deals traded for the week took a free fall by 17.07% week on week to 15,697 deals from 18,928 deals in the previous week.

Going into the new week, we expect the market to trade in the bullish region despite the absence of a major trigger that is likely to drive activities in the market for investors seeking alpha.

However, we continue to advise investors to trade on companies’ stocks with sound fundamentals and a positive outlook amid the macro-dynamics which remains a headwind.