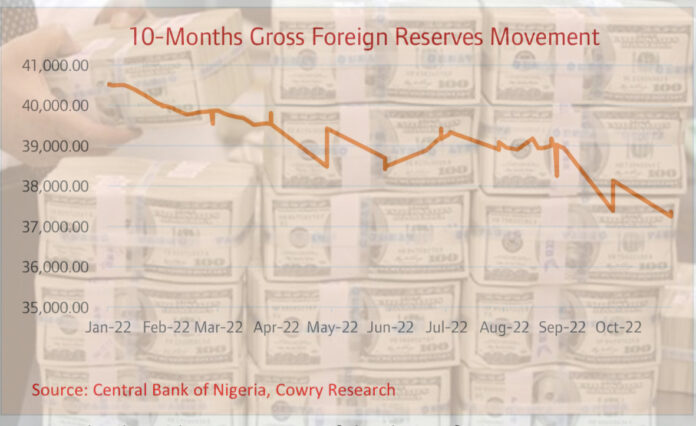 This week, we took a look at the latest data obtained from the Central Bank of Nigeria website showed that Nigeria’s gross external reserves lost 8.07 per cent or $3.27 billion in over 10 months to settle at $37.25 billion at the start of November from $40.52 billion at the beginning of the year.

The decline can be attributed to the non-inflow of petrodollars into Nigeria’s economy despite the rally in crude oil prices due to the upbeat in oil demand since the Russian invasion of Ukraine in February 2022.

Over the years, the Central Bank of
Nigeria (CBN) has always maintained a
culture of intervening in the various
foreign exchange markets such as the
investors and exporters (I&E), and the
Secondary Market Intervention Sales
(SMIS) windows respectively, following the difficulties experienced in those markets with forex supply.

Consequently, this frequent intervention in a bid to salvage the local currency has been the major trigger of this drop in foreign reserves.

In the same vein, Nigeria’s gross official reserves declined by around $866 million to $37.37 billion in October.

The level reported this time is the second highest since May of this year and follows a decrease of $772 million in September 2022.

Brent crude trades at above $96 per barrel at the time of writing in the face of the news that China has taken steps to ease its earlier imposed covid-19 restrictions.

The oil price had before now risen to a high of $123 per barrel in June this year and Nigeria has recorded little or no earnings from oil sales this year despite the rise.

This is largely due to the oil sector’s low productivity resulting from large-scale crude oil theft and pipeline vandalism.

The data actually excludes the condensates and the current figure hangs below the potential output of 2 million barrels per day.

Meanwhile, checks from the CBN data vault showed that the total reserves could cover 8.5 months of imports based on the balance of payments for the 12 months to June 2022, and 6.5 months when we add services.

Nigeria’s gross reserves have slid in spite of higher oil price which we do not see rising soon on the back of rising imports as well as the continued demand for foreign exchange to finance services such as school fees, medical tourism, etc.

We see a combination of these factors to continue exerting pressure on external reserves and exchange rates as we drive closer to the 2023 general elections.

Having said that, we can add that low inflows of foreign investments into the economy in the face of a challenging business environment will trigger further depreciation in the exchange rate due to pressure on the local currency and raises concerns for the apex bank.