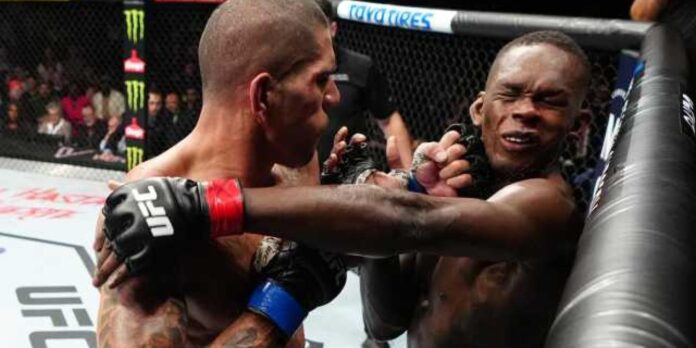 When it appeared like Pereira was doomed, he resolved to leave everything in the cage and go for Adesanya with everything he had left.
Brazilian professional mixed martial artist and former kickboxer, Alex Pereira is the new UFC middleweight champion after knocking out longtime opponent Israel Adesanya in the fifth round in only his fourth bout.

When it appeared like Pereira was doomed, he resolved to leave everything in the cage and go for Adesanya with everything he had left.

A left hook knocked Adesanya down, signalling the start of the end as Pereira fired a flurry of blows in quick succession, MMA Fighting reports.

Adesanya fell to the ground briefly but staggered back to his feet, only for Pereira to continue the assault until referee Marc Goddard saw enough to save “The Last Stylebender” before he sustained further damage. Pereira celebrates his victory at 2:01 of the fifth and final round of the UFC 281 main event.

“I feel so blessed,” Pereira said about his victory. “I worked so hard for this. Sorry to everybody that I had to post some stuff, I had to do a little bit of trash talk this time. But I had to get in his head to get this fight.”

The fight was definitely a clash of top strikers, with both Adesanya and Pereira demonstrating high-level technique throughout. The first huge blow of the night came from Adesanya’s well-timed right hand, which took Pereira off guard.

With five minutes remaining, Pereira decided to just go after Adesanya in a kill or be killed moment and the game plan paid off.

As Adesanya backed up against the cage, Pereira cracked him with the left hook that led saw the champion wobbled momentarily. Then Pereira began throwing bomb after bomb with Adesanya showing no real signs of fighting back but instead just shifting into survival mode.

Once it was clear Adesanya was only taking punches without offering much resistance and Pereira still looking for the finish, the referee decided to stop the contest. It was a dramatic ending to arguably one of the best middleweight title fights in history.

“It was a very hard but just like Glover said, I was going through a fight every day at the gym,” Pereira said. “For everybody that said I couldn’t do five rounds, look at what I did just now. I’m ready for the next.”

It’s an improbable run for Pereira, who likely secured this title shot based largely around two previous wins over Adesanya in kickboxing. Now he’s scored a third victory while becoming the UFC middleweight champion.