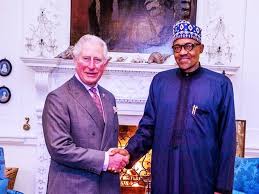 The Nigerian president is currently on medical vacation in UK.

This is the first meeting between the Nigerian leader and the monarch since he ascended the throne following the demise of his mother, Queen Elizabeth II.

Buhari did not attend the Queen’s funeral, which coincided with the UN General Assembly, but he was represented by Vice-President Yemi Osinbajo.

The Nigerian president is currently on medical vacation in UK. He is due to return to the country next week, according to Femi Adesina, his spokesman.

Some pictures of the visit posted on Twitter show President Buhari shaking hands with the new monarch, with the two of them smiling.