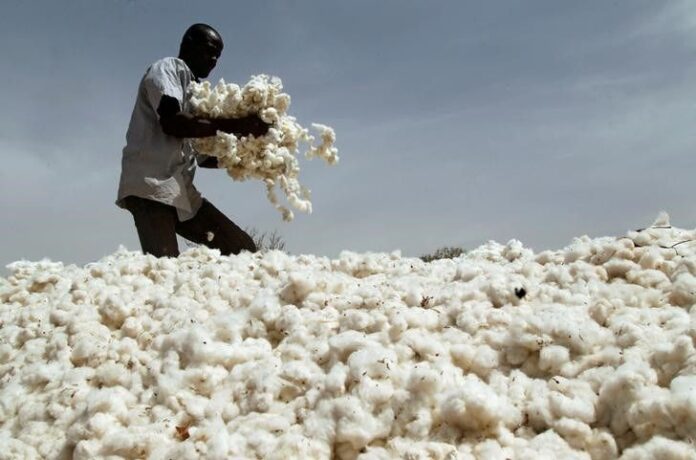 The insects known as jassids settle under cotton leaves and feed on plant tissue, injecting a toxin that causes leaves to curl downwards and stunts reproductive capacity.

Usually prolific in dry weather, they have spread with unprecedented intensity this year despite above-average rainfall in many parts of West Africa, where most of the continent’s cotton is grown.

Two new species that appear to be more invasive and resistant to pesticides have been detected, said Senegalese textile company SODEFITEX in a recent report.

As a result, cotton producers in Senegal are only expecting to yield 500 kilogrammes per hectare compared to 1.3 tonnes estimated at the start of the season, said the National Federation of Cotton Producers (FNPC).

“If we do not find a stopgap for this scourge it will be the death of cotton, not only in Senegal but also for the region,” FNPC head Hamidou Diao told Reuters this week.

Togo has already lost more than 8% of the 72,000 hectares of cotton planted this season, mainly in the north of the country.

Output could drop by around 10% due to the parasite, and it is moving south, said the country’s main cotton company, Nouvelle Societe Cotonniere du Togo, in which Olam holds a 51% stake.

HEAVY IMPACT
There was no immediate update on the production forecast in top producers Mali, Benin, Burkina Faso, which together with Togo account for around 50% of regional output, according to research firm Mordor Intelligence.

But authorities in Mali said the parasites were infesting fields there and officials were en route to estimate the damage.

“This morning a cotton grower in the area told me that he will not be harvesting this year.”

Such widespread harvest failure could be devastating for Mali, where about a quarter of the population earn their living from cotton, according to the Economics of Land Degradation initiative.

Burkina Faso is also affected. The parasite appeared earlier than usual this year, in July, catching farmers off guard and attacking early crops that had not yet been sprayed, local textile firm SOFITEX said in a report.

Meanwhile in Ivory Coast, the jassid infestation could reduce cotton output by between 30% and 40% this year, the national cotton and cashew council estimated this week.

Jassids were once seen as a minor pest in Ivory Coast, but they have become an increasing threat in recent years partly due to rainfall pattern changes among other issues, according to a study focused on the Ivorian cotton sector published in the Journal of Experimental Agriculture International in April.