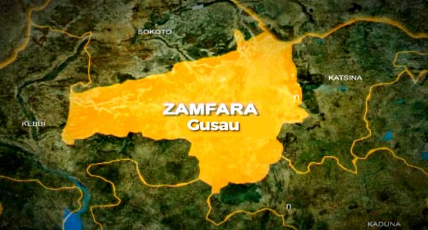 Several women and children, who were fleeing a terrorist attack in Birnin-Waje, a community under Bukkuyum Local Government Area of Zamfara State, drowned on Wednesday when the canoe they were fleeing upon, capsized.

Terrorists invaded the community on Wednesday at about 5:45pm, shooting sporadically, which forced residents to flee for their lives.

Umar Birnin-Waje, a resident of the community who escaped the terrorists attack, told Channels Television that the gunmen operated in the community for over three hours unchallenged.

“The bandits entered the village around fifteen minutes to six and they were there till 10pm, I hid in one corner when the attack happened and there was no security to repel the attack,” he narrated.

According to him, nine persons mostly women and children were buried on Thursday afternoon while efforts are still ongoing to recover other bodies.

“You know Birnin Waje is a riverine community, when the bandits enter the village, many people ran for safety, so they boarded canoe and the canoe sank. As I am talking to you now, we have buried nine people and they’re mostly women and children.”

The Director General to the state governor on new media, Ibrahim Bello Zauma, confirmed the incident on his Facebook page.

“Following an onboard stampede of displaced persons running from pursuing bandit terrorists at Zauma ferry station, an unknown number of mostly women and children got drowned after two canoes capsized,” Zauma’s post read.

AS at the time of filing this report, all attempts to reach the spokesperson of Zamfara State Police Command, SP Mohammed Shehu, proved abortive.