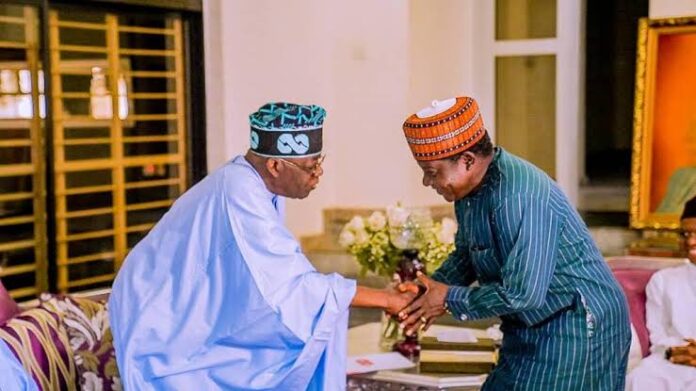 As political parties and their candidates begin to canvass for votes, in compliance with the timetable of the Independent National Electoral Commission (INEC), all eyes are on Plateau State Governor Simon Bako Lalong. He has several tasks that he must fulfil during the election to remain politically relevant. Lalong is contesting the Senate seat for Plateau South senatorial election. He is also the Director-General of the Tinubu/Shettima presidential campaign organization.

He knows the importance of the assignment for the party, which is facing a tough battle to remain in power beyond next year. Already, his senatorial ambition is generating much interest in Plateau State and beyond for several reasons. Some observers believe the fifth civilian governor of Plateau State is biting more than he can chew at the same time. For one thing, being the first governor on the platform of the All Progressives Congress (APC), he will not want the era of the party in Plateau State to end after his tenure. He, therefore, has a duty to ensure the party retains the state beyond next year’s election.

For another, Lalong has undertaken to break a political record in the state by installing his successor. All the four civilian governors before him attempted to install their successors but failed. The first civilian governor was Solomon Lar, the second was Fidelis Tapgun, while Joshua Dariye and Jonah Jang were the third and fourth respectively. All of them failed to install their successors. In his quest to break this jinx next year, Lalong is fighting tooth and nail to ensure that Dr Nentawe Yilwada, his preferred successor and governorship candidate of the party in next year’s election wins at the polls.

Other APC stakeholders are accusing the governor of imposing candidates for various elective positions on the party, especially for the governorship election. The accusation has gone beyond the APC secretariat in Jos to the national secretariat in Abuja. It has even moved to the courts. The party is currently battling to resolve at least seven litigations bordering on the impositions of candidates. Thus, the internal crisis in the party may affect its cohesion ahead of the election.

In addition, Lalong is the senatorial candidate of the APC for Plateau South Senatorial Zone in the same election. The governor obtained the ticket unopposed, but at the expense of the incumbent Senator Nora Daduut. But, his candidacy is also generating some ripples in the constituency. The women folk are not happy with him. They would have loved to see the incumbent lawmaker representing the constituency, a woman, seek re-election. Plateau women had volunteered to purchase the nomination forms for her and had raised the money, but Lalong was accused of deploying his incumbency power to deprive Senator Daduut of the opportunity.

Besides, as the director-general of the APC Presidential Campaign Council, Lalong has been saddled with the responsibility of realising the Tinubu/Shettima bid for the presidency. The campaign secretariat is located in Abuja, while Lalong’s office is in Jos, the Plateau State capital. Considering the multiplicity of the political assignments before the governor ahead of next year’s election, pundits have expressed fear that he may have taken up too much responsibility.

Notwithstanding the seeming difficulty in the multiple political assignments before Lalong, the governor’s loyalists and ardent supporters believe that he is capable of handling them and achieving the needed victory in the end. One of such ardent loyalists is the Chairman of Kanam Local Government, Dayyabu Garga.

Garga said Lalong is a political juggernaut who does not make noise while at work. He said: “I have confidence that Lalong will surprise all his detractors; he is already set his mind to install his successor from his political party on the Plateau come May 29, 2023. Lalong is about to break the jinx and set a new record in Plateau State. Since 1999, his predecessors have not been able to hand over to his preferred successor because the governors then circumvented the zoning arrangements in the state.

“But, this time around, Lalong got it right from the foundation. Being a democrat, he meticulously supervised the zoning of the governorship ticket to the Plateau Central Senatorial Zone in line with the zoning arrangement on the ground. For this reason, there is no dissenting voice; everybody is happy.”

Besides, he said the incumbent governor has performed creditably well and has stabilised the state. His words: “There is peace in the once troubled parts of the state and, most importantly, he has carried everyone along, irrespective of creed, religious or tribal affiliation. I want to tell you that Governor Lalong is a team player.”

Garga dismissed with a wave of the hand the possibility of the Labour Party posing a threat to the APC in the election. He said: “The hype about the presidential candidate of the Labour Party, Mr Peter Obi on social media cannot translate to victory in 2023.”

Lalong’s effort to install his successor is not going to be an easy task. Besides the backlash during the APC congress where Nentawe emerged as the party’s candidate, many stakeholders are beginning to wonder whether Nentawe possesses the requisite experience to govern a state like Plateau.

Shabul Mazadu opined in his article: “Plateau State is seen as a mini Nigeria. Therefore, it is indeed difficult to govern it. It requires a person with leadership experience in a heterogeneous environment and who has been in government to understand the psyche of the citizens.

Mazadu added: “Plateau needs someone who was in government and had an experience of the crises the state went through to be able to restore peace and unite the people. Some of the governors performing very well in government are Babagana Umara Zulum (Borno State), Nyesome Wike (Rivers State), Abdullahi Ganduje (Kano State) and so on.”

With the campaign already on, all eyes are on Governor Lalong to see how he will play his multiple roles and come out victorious in next year’s general elections. Only time shall tell.