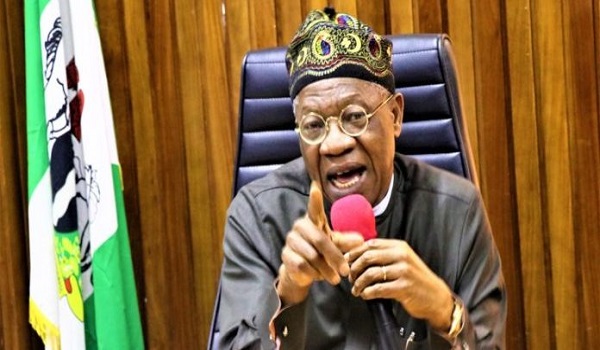 The Federal Government says it will be impossible for the opposition Peoples Democratic Party (PDP) to desist from looting public treasury, if it regains power.

The Minister of Information and Culture, Alhaji Lai Mohammed said this in an interview with the News Agency of Nigeria (NAN) yesterday in Arusha, Tanzania.

But, PDP returned the salvo, saying that the ruling All Progressives Congress (APC) is afraid of its shadow. Its publicity secretary, Debo Ologunagba said APC is corrupt.

Yellow Page mobile
Mohammed was reacting to media reports that some members of the PDP National Working Committee (NWC) had returned N122.4 million paid into their accounts by the party leadership.

There had been media reports that the PDP’s National Chairman, Iyorchia Ayu, allegedly paid more than N100 million to the NWC members after the party’s primaries.

It was alleged that the money was from the more than N10 billion realised by the party from nomination fees paid by aspirants.

The minister said: “if a man can steal from himself, he will steal without any restrain from other people.

“When PDP lost elections in 2015, they admitted that they had learnt their lessons, but obviously, they have learnt nothing.

“God forbid, if they ever have access to public purse again, they will leave no kobo there.

“We know what we met when we assumed office in 2015, we are still wailing from it.

“We hope Nigerians have now seen from this scandal the intention of PDP if they ever have access to public treasury’’.

Mohammed said certain questions should be raised from the development, including, what informed the payment in the first place and if it was the first time such money was paid.

He said the party should also be questioned on the source of the money and whether it was from the slush fund it had in its possession.

Mohammed recalled that as a member of NWC of the then Action Congress of Nigeria (CAN) and later, the All Progressives Congress (APC), no fund was ever paid into his account.

He said: “Never did I remember that any form of money, call it, accommodation, or whatsoever, was ever paid into the account of any member of the NWC of either ACN or APC’’.

The minister is in Arusha for the 65th meeting of the United Nations World Tourism Organisation (UNWTO)’s Commission for Africa and a forum on “Rebuilding Africa’s Tourism Resilience for Inclusive Socio-Economic Development’’.

The event is being attended by no fewer than 40 African Ministers of Tourism, UNWTO leadership and the Organisation’s representatives from other blocs.

However, Ologunagba said APC has destroyed the country with corruption.

He challenged Mohammed to explain how serving ministers in the Buhari administration came about the N100 million they paid to obtain the APC presidential nomination forms.

He alleged that the money was taken from federal government purse and funneled to the coffers of the APC, which he said, was later shared among some chieftains of the ruling party.

Ologunagba said: “Nigerians should ask the APC what has happened to the case of a public official who allegedly took N109 billion of public funds.

“They should explain to Nigerians why they a former Managing Director of the Nigerian Ports Authority, who was facing massive corruption allegation, got appointed into the APC presidential campaign council.

“Let the APC explain to Nigerian what has happened to those who looted the Federal Inland Revenue Service under their watch.

“We challenge them to tell us why they swept the multi million Naira grass cutting scandal under the caprtet”.

Challenging the Minister to a public debate on PDP’s 16 years performance record against APC’s in seven years, Ologunagba said the ruling party has been afraid to face their own record.

“The APC is a party in liquidation and dying by instalments. It’s a special purpose vehicle cobbled together by desperate power hungry individuals whose only mission was to loot public treasury.

“Alhaji Lai Mohammed and his APC have chosen to hold on to a thin straw, which unfortunately cannot save them from an impending defeat in 2023.

“We recall that their leader, President Muhammadu Buhari, promised to bring the country from top to bottom. And true to his words, they have succeeded in bringing Nigeria from the top, where they met it in 2015, to the bottom where we are now.

“The PDP had the will to fight corruption and that’s we established the Economic and Financial Crimes Commission (EFCC), Independent Corrupt Practices and Other Related Offences Commission (ICPC) among other anti graft agencies.

“But the APC has been sweeping corruption among their gang members under the carpet with virtually all the cases gone cold.”