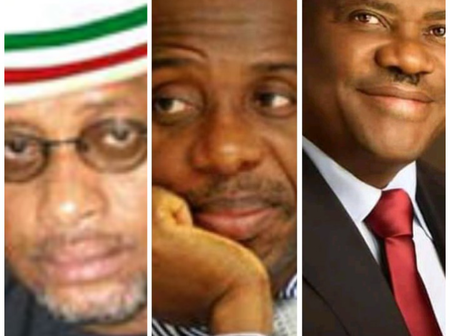 It gave Omehia seven days to return the N696.5million he received as a former governor.

Omehia served as governor between May 29 and October 24, 2007, but was later removed by the landmark Supreme Court judgment that replaced him with his cousin Rotimi Chibuike Amaechi.

But yesterday’s motion quashed his status as “Former Governor” of the state.

Rivers State Governor Nyesom Wike approved the move and scheduled October 7 (today) to sign the instrument on cancellation of the recognition of Omehia as a former governor.

The motion to “Derecognise” Omehia as former Governor was moved by the Leader of the House, Martin Amaehwule, of Obio/Akpor Constituency 1.

The 8th Assembly, on June 30, 2015, passed a resolution which compelled the Executive Arm, headed by Governor Nyesom Wike, to recognise Omehia as a former Governor and to be accorded all entitlements, privileges and benefits.

In yesterday’s motion, Amaehwule argued that the continued recognition of Omehia in that capacity would be a breach of the 2007 Supreme Court judgment which removed him (Omehia) as a governor for not being the duly elected candidate in that year’s governorship election.

To strengthen his submission, the lawmaker submitted a copy of the Nigerian Weekly Law Report (NWLR) that contains the landmark judgment that removed Omehia from office and declared Amaechi as the duly elected candidate of the PDP at the time and the right person to occupy the office of governor.

He said the motion was moved to reverse the earlier resolution because the 9th Assembly had better knowledge and particulars of the said Supreme Court judgment.

The lawmaker submitted four prayers to the house for consideration, they are; “Rivers State House of Assembly seeks to derecognise Celestine Omehia as former Governor. Motion passed.

“The House rescind its earlier resolution that Omehia be recognised. Omehia ceases to use the title ‘HIS EXCELLENCY’ “Omehia stops using the acronym “GSSRS”, meaning, Grand Service Star of Rivers State, which is a state honour meant for incumbent and former governors alone.

“Any other decisions that the house deemed necessary.”

The motion was seconded by the Whip of the House and member representing the Ogu/Bolo Constituency, Evans Bipi.

In a debate, all the lawmakers who made contributions, including the representative of Ikwerre Constituency, Omehia’s home town, Anselm Oguguo, supported the prayers.

Some of the lawmakers, however, requested that a specific decision be made on what action to be taken if Omehia fails to refund the monetary benefits.

After the debate, all 21 members present at the plenary voted in support of the four prayers by the leader of the House.

The Speaker of the Rivers State House of Assembly, Ikuinyi-Owaji Ibani said the house was right in taking the decision “because no law is absolute.”

A statement signed by Wike’s Special Assistant on Media, Kelvin Ebiri, said the governor would sign the instrument at the Government House at 12noon.

“The cancellation of the recognition is sequel to the resolution of the Rivers State House of Assembly adopted on Thursday, 6th October 2022 to derecognise Sir Celestine Omehia as a former governor of the state”.

Also yesterday, the Rivers State chapter of the All Progressives Congress (APC) asked the RSHA to apologise to the people for going against the October 2007 judgment by making legislation in 2015 recognising Omehia as a former governor.

Its spokesperson, Mr. Darlington Nwauju, in a statement shortly after the House withdrew the recognition, described the lawmakers’ 2015 behaviour as “legislative brigandage.”

Nwauju said: “It is one example of legislative brigandage in Rivers State, wherein the Rivers State House of Assembly brazenly committed an affront on the 25th of October 2007 judgment of the Supreme Court which declared that in the eyes of the law, Sir Celestine Omehia was never a Governor of Rivers State.

“Back then in 2015, it was politically correct to recognise Omehia but with the political realities of today, it’s no longer expedient.

“A state Assembly maliciously disregarded the letters and spirit of the October 25, 2007, judgment, only to turn around to shamelessly demand that the privileges Omehia enjoyed as a result of its infantile rascality in 2015, be refunded within seven days.

“Should the Rivers State House of Assembly not be apologising to Rivers people by now for poor representation?

“The deployment of political might in Rivers State and the obvious abuse of such powers is a danger signal to the growth of democracy in Rivers State.

“How can a State House of Assembly which should ordinarily serve as the bastion of democracy, the voice and conscience of Rivers people, be reduced to the governor’s lackey and attack dog against the governor’s perceived political enemies?”