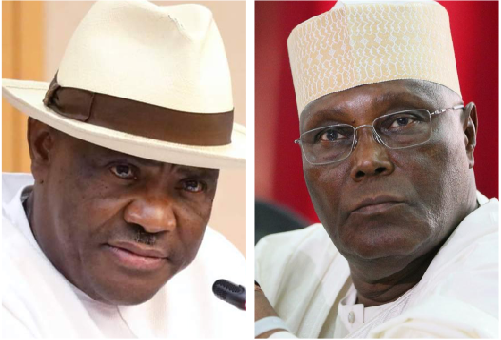 Division among members of the National Working Committee (NWC) of the Peoples Democratic Party (PDP) over the return of N122.4 million by four members may escalate the rift between the PDP presidential candidate, Atiku Abubakar and the Rivers State Governor, Nyesom Wike, it was learnt yesterday.

The Forum of Elected PDP Ex-Officio members, who stormed the Abuja national secretariat of the PDP yesterday, sounded the warning.

The chairman of the Forum, Dr. Illiya Yunana, described the suspicion in the NWC as “a disturbing and destabilising scenario”

Yellow Page mobile
Briefing reporters shortly after the visit to the leadership, he urged the feuding parties to be careful in their utterances.

Yunana, who addressed newmen on behalf of his colleagues, called on the party leaders to stop bringing their internal problems to the public.

He said: “The aggravating circumstances being thrown up by conflicting accusation and counter accusation of who is right and who is wrong, a matter which the Forum of National Ex-officios feels is not necessary at this electioneering period.

“It is our considered view that the driving force of PDP members from Ward to National level is how best to win the elections in 2023 to rescue, rebuild and reposition Nigeria.

“We are greatly alarmed by the effect of all these controversies on the moral of the generality of our teeming supporters across the length and breathe of Nigeria and in the diaspora”.

Warring that the crisis could cost the PDP victory in next year’s election, the Forum appealed to waring factions to sheathe their swords in the interest of the party.

Yunana, however, supported the decision of the National Executive Committee (NEC) to pass a vote of confidence in the Iyorchia Ayu-led NWC during its last meeting.

He said the confidence vote was a bold statement on the unity of purpose, which it said, was required by the PDP to go into the election as a united family.

He added: “We implore all our leaders and members who have one issue or the other to avail themselves of internal differences resolution mechanism as provided for in our party constitution.

“Finally, we reaffirm our loyalty and commitment to our party in its determined resolve to win the 2023 general elections at all levels so as to restore Nigeria to its pride of place”.