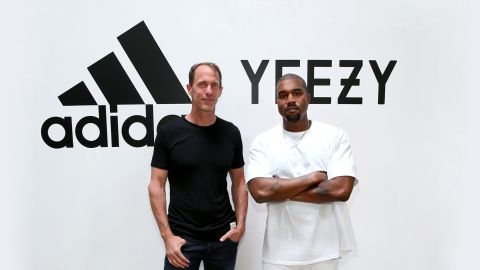 “After repeated efforts to privately resolve the situation, we have taken the decision to place the partnership under review,” the company said in a statement obtained by CNBC. “We will continue to co-manage the current product during this period.”

The company also said its relationship with West has been “one of the most successful collaborations in our industry’s history.”

West, 45, posted a vulgar response to Adidas on Instagram about its recent announcement.

“FUUUUUUCK ADIDAS I AM ADIDAS ADIDAS RAPED AND STOLE MY DESIGNS.”

West started working with Adidas to distribute his Yeezy brand of sneakers and apparel in 2013. Forbes estimates that the partnership is worth $1.5 billion.

This Adidas announcement comes days after West wore a “White Lives Matter” T-shirt at his Yeezy runway event on Tuesday during Paris Fashion Week. A picture of West and right-wing pundit Candace Owens, wearing the controversial shirt in white, drew criticism from celebrities and Black Lives Matter supporters, including the mother of Ahmaud Arbery. Arbery was a 25-year-old Black man who was chased and killed by three white men in February 2020 in Glynn County, Georgia. In response to the death of Arbery, protesters demonstrated across the country calling for justice for his death and the deaths of other unarmed Black victims.

West donated $2 million to the families of Arbery, Breonna Taylor and George Floyd in June 2020.

The relationship between West and Adidas has been rocky over the past few months. West has called out Adidas CEO Kasper Rorsted and accused him of stealing his designs. In June, West told Rorsted in a now-deleted Instagram post that “I’m not standing for this blatant copying no more.”

West also put photos of Adidas executives in now-deleted Instagram posts and made fun of their appearances.

In September, West terminated his three-year partnership with Gap under similar circumstances. His lawyers said the fashion company broke their agreement by not releasing merchandise and opening multiple store locations, according to The Wall Street Journal.
This article originally appeared on HuffPost and has been updated.