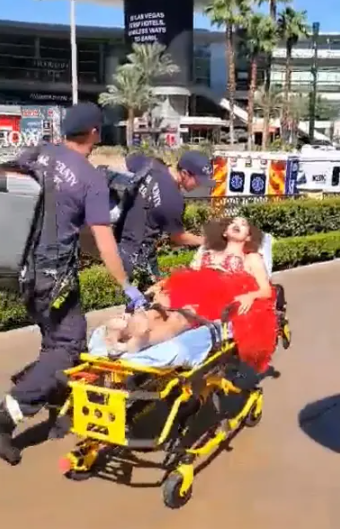 Two people have died and at least eight others injured after a violent stabbing on the Las Vegas strip on Thursday, October 6.

Some of the victims were showgirls taking pictures with tourists, eyewitnesses told Fox 5.

The attack began around 11:42 a.m. local time on South Las Vegas Boulevard, near the Wynn Las Vegas and the Resorts World Casino, according to Police.

Sheriff Joseph Lombardo told reporters on the scene there had been eight victims; two had died and three were in critical condition in a hospital.

He added a suspect was in custody and a kitchen knife had been recovered from the scene.

Reporter Joe Moeller at local station KTNV Tweeted: “I’m speaking with a woman who says 4 injured showgirls work for her. She says the suspect had a knife & claimed he was a chef & wanted to take a picture with the showgirls, when they said no that is when the stabbings started.”