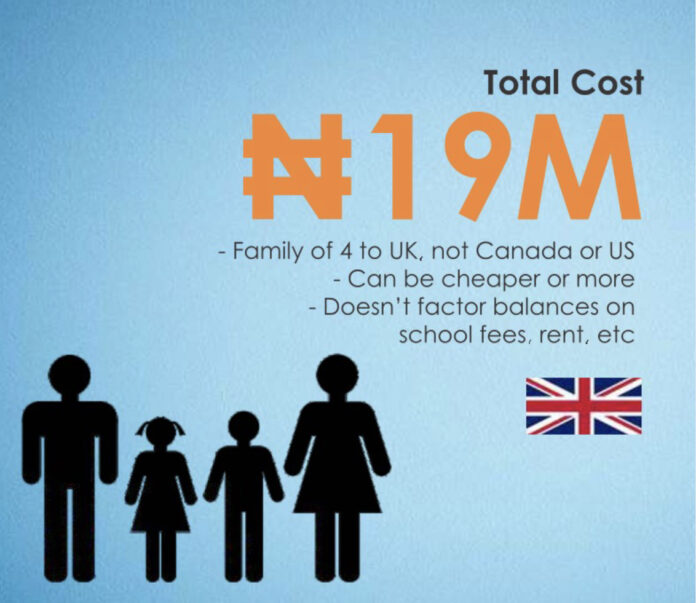 Last Friday, I hugged one of my most impressive colleagues goodbye. He turned away, sobbing. I turned away with voice quaking, realizing what a big loss he would be.

Later that evening, I had another get-together with a second friend who relocates this week. While discussing his massive expense, he suddenly slouched in his chair, stressfully squeezed the empty ragolis bottle in his hands and concluded:
1664953095124 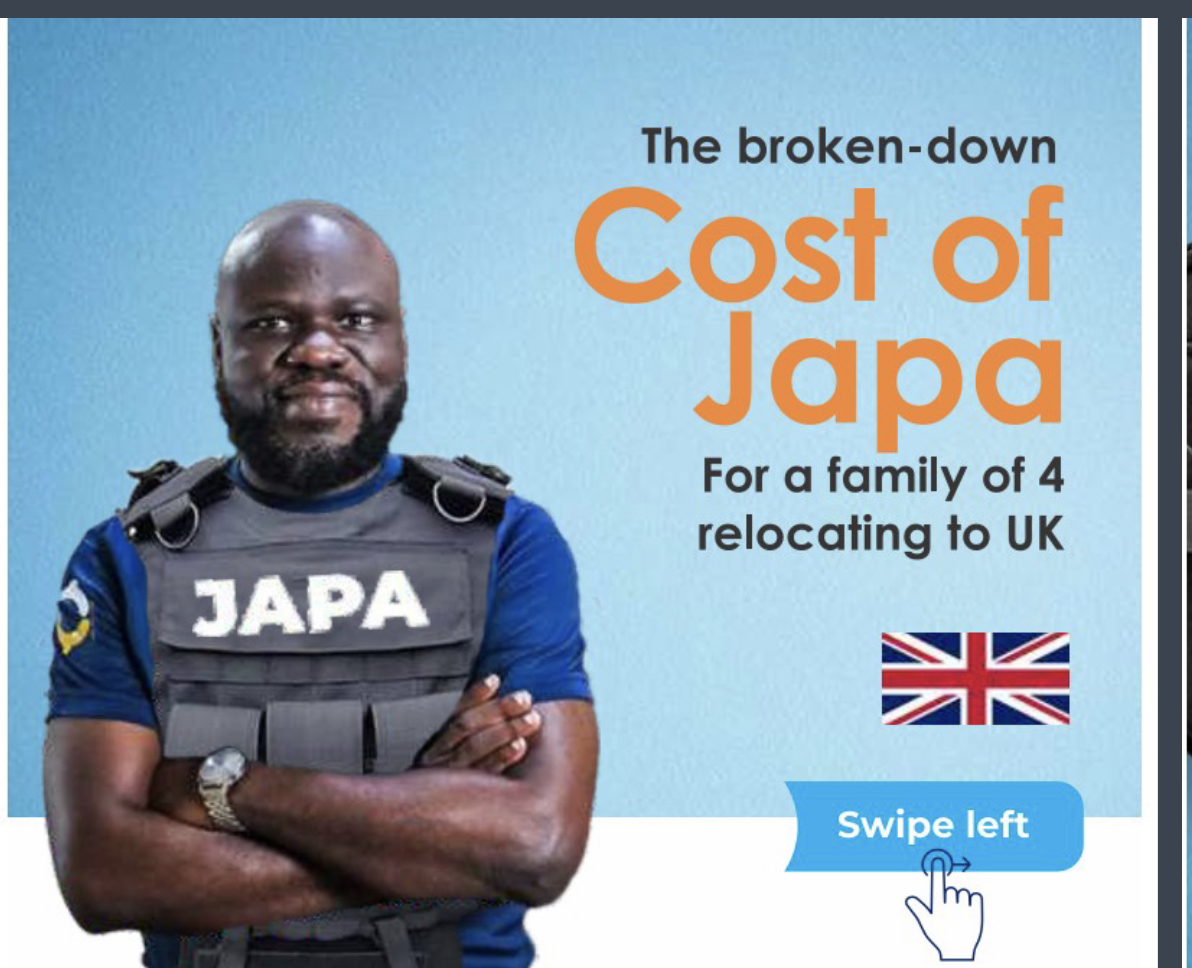 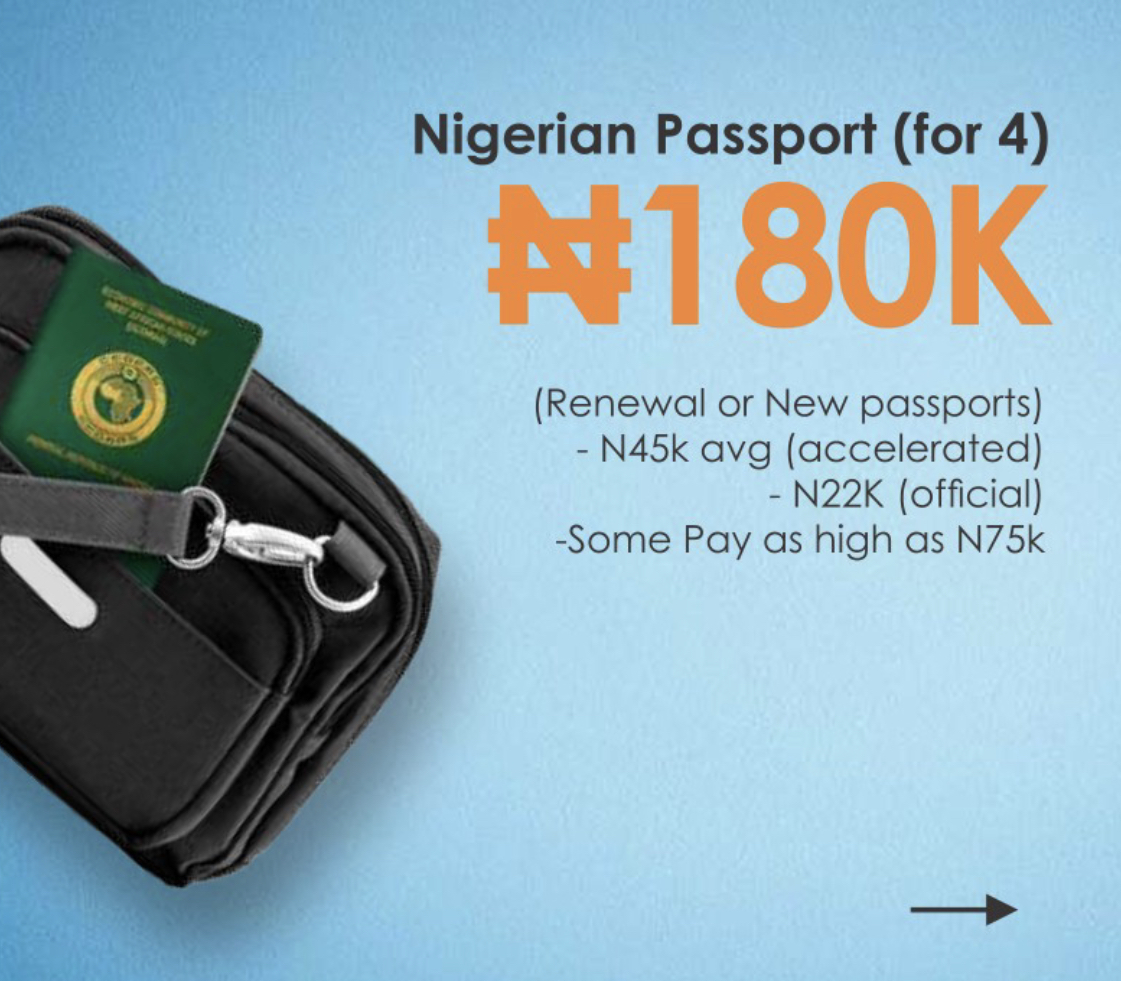 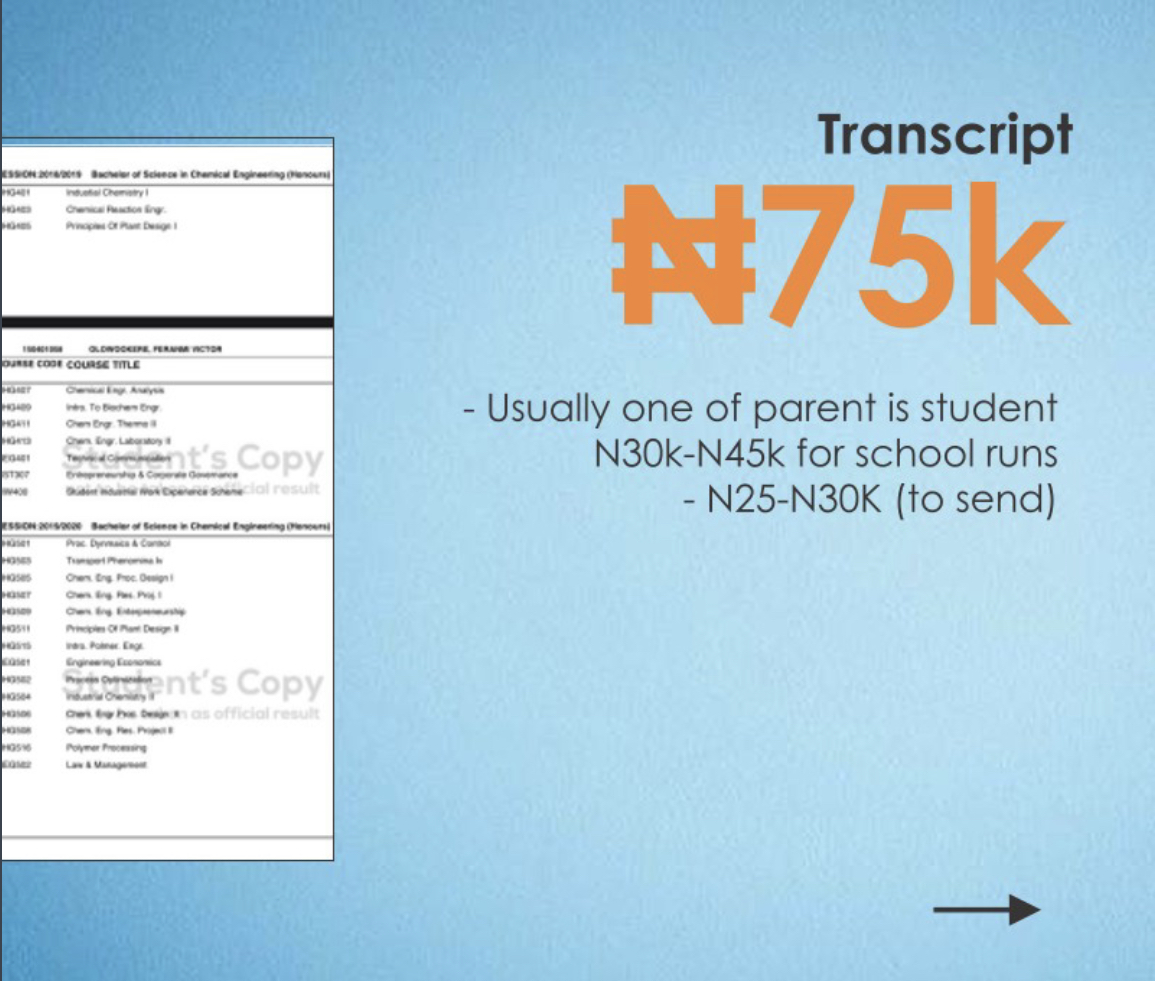 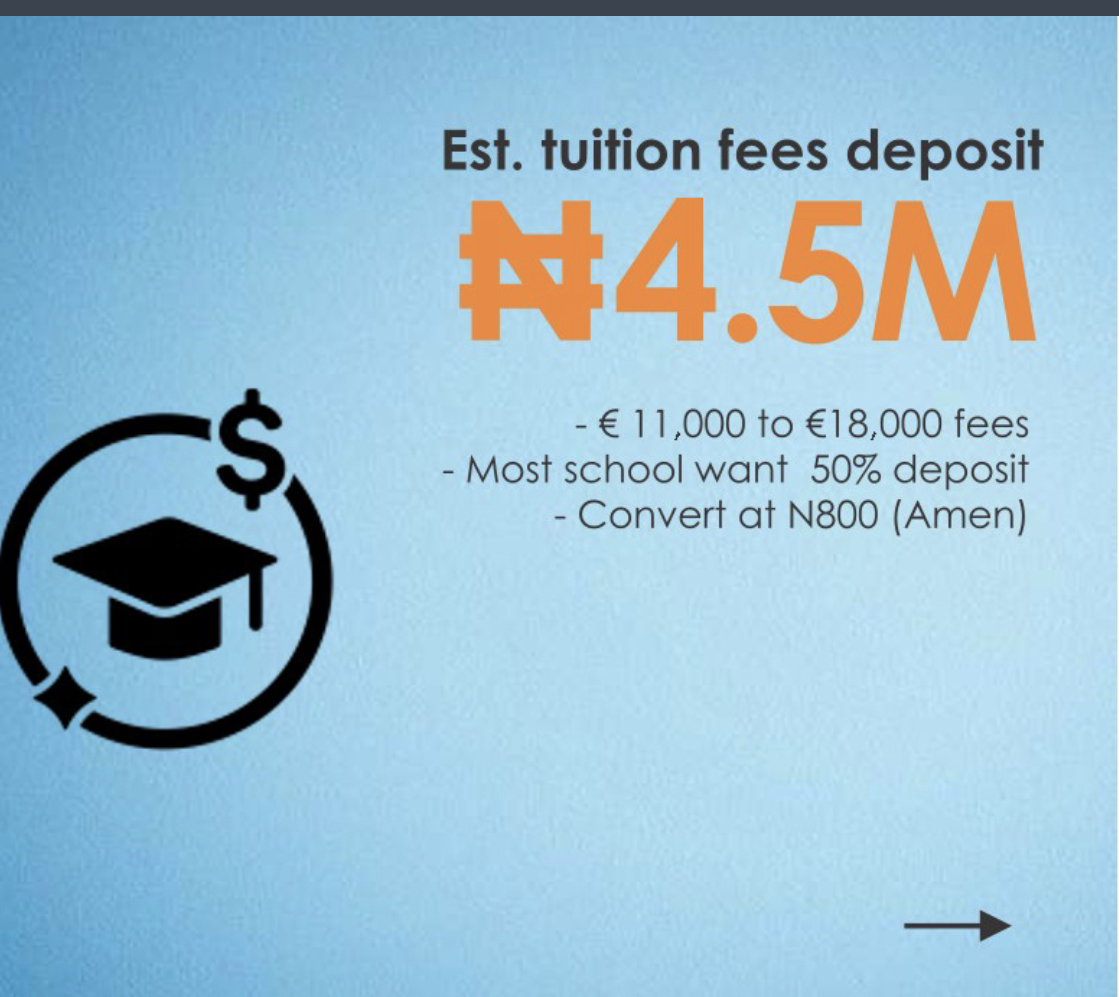 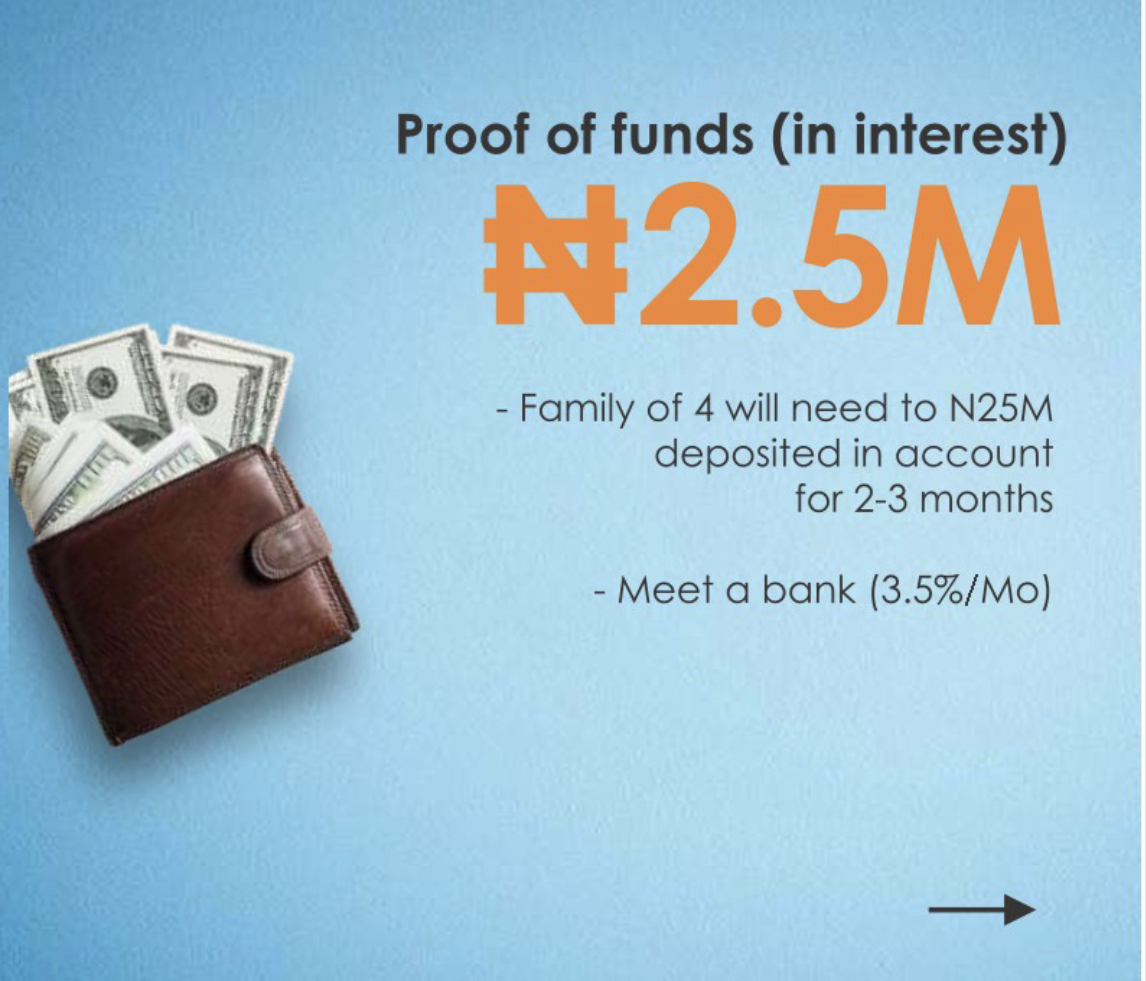 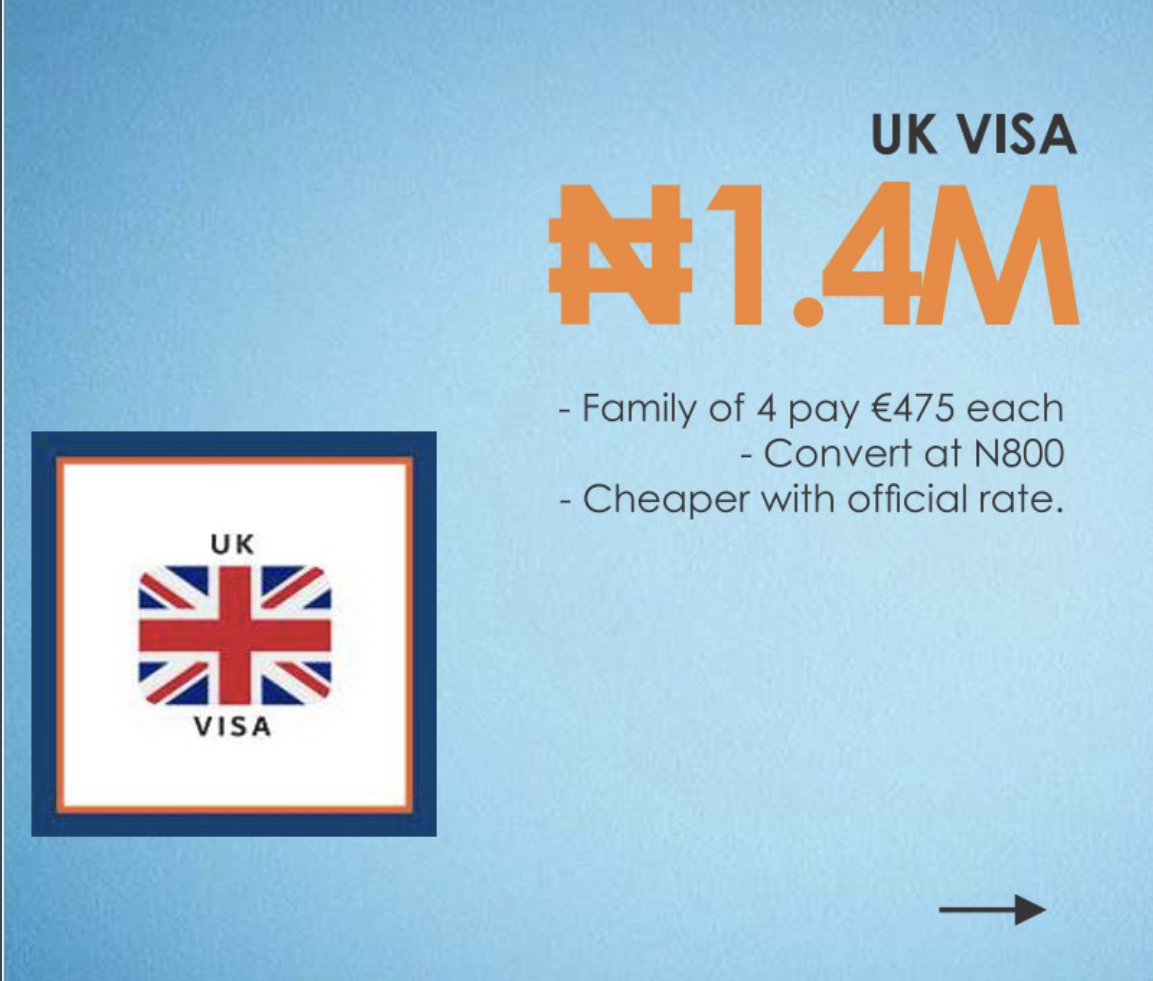 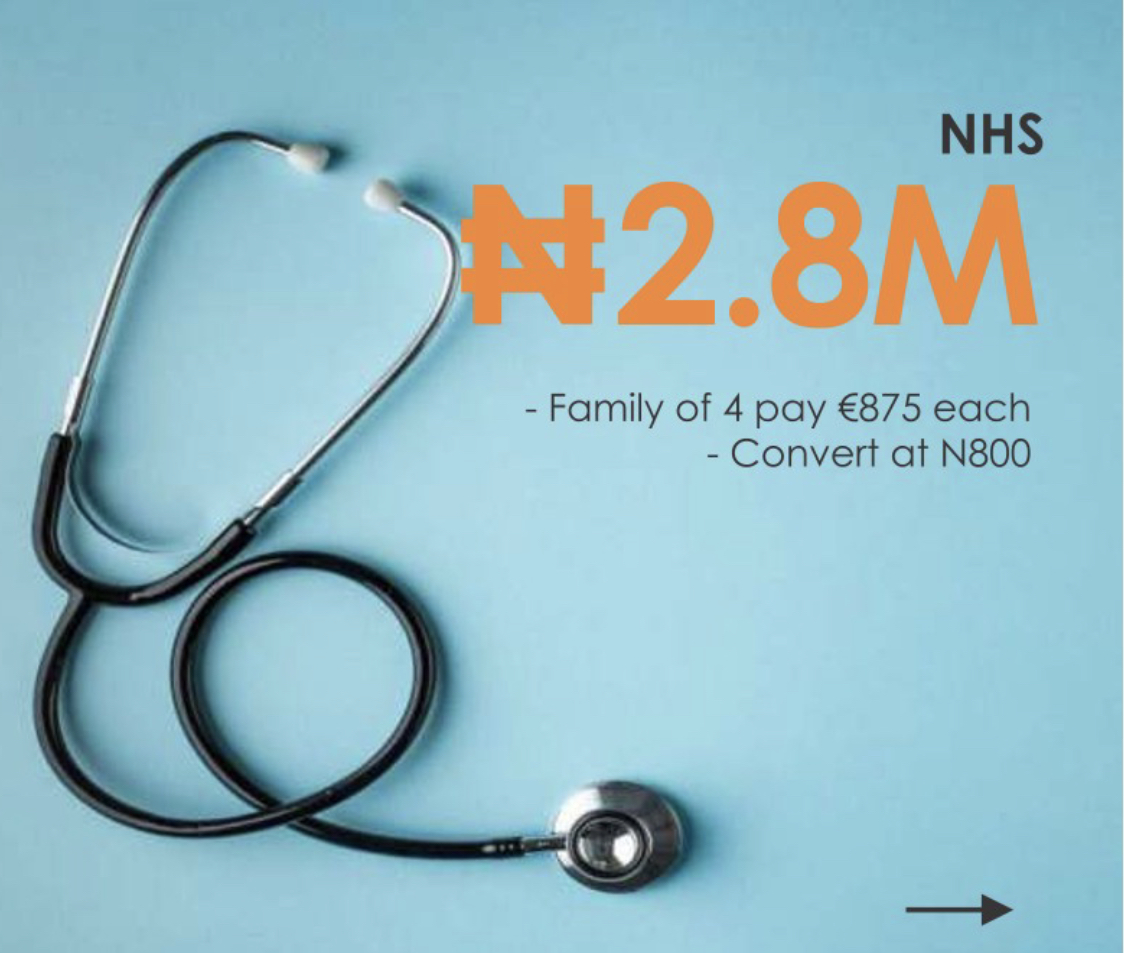 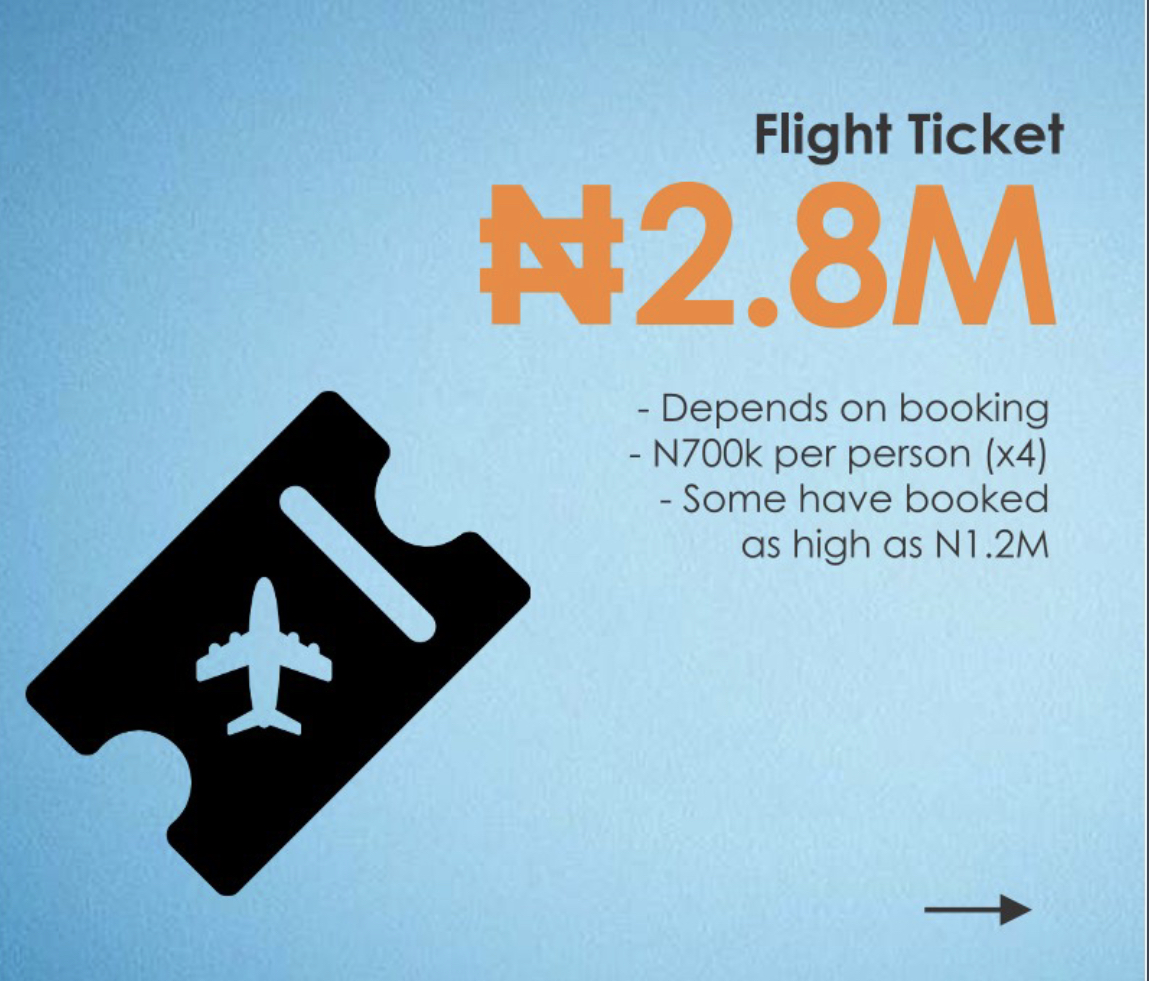 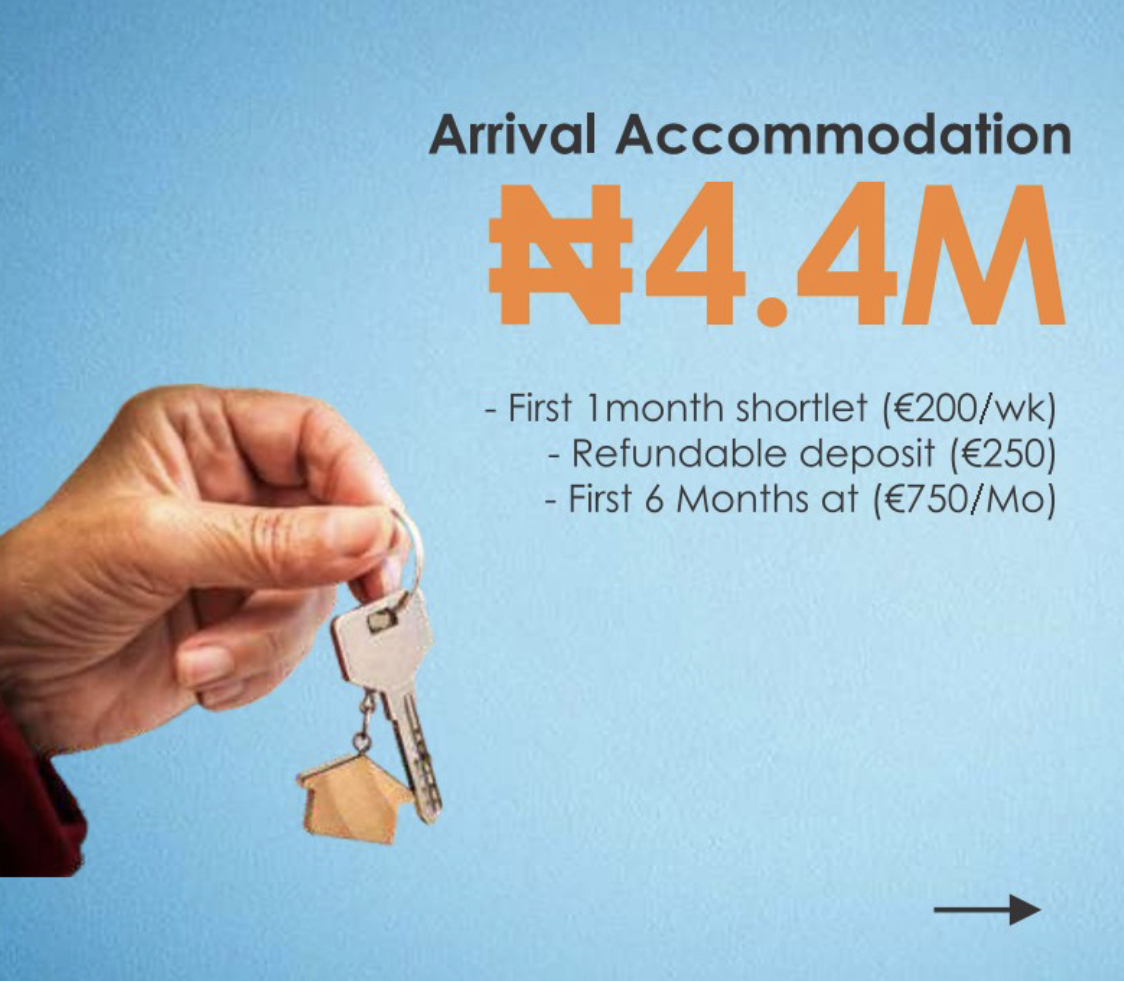 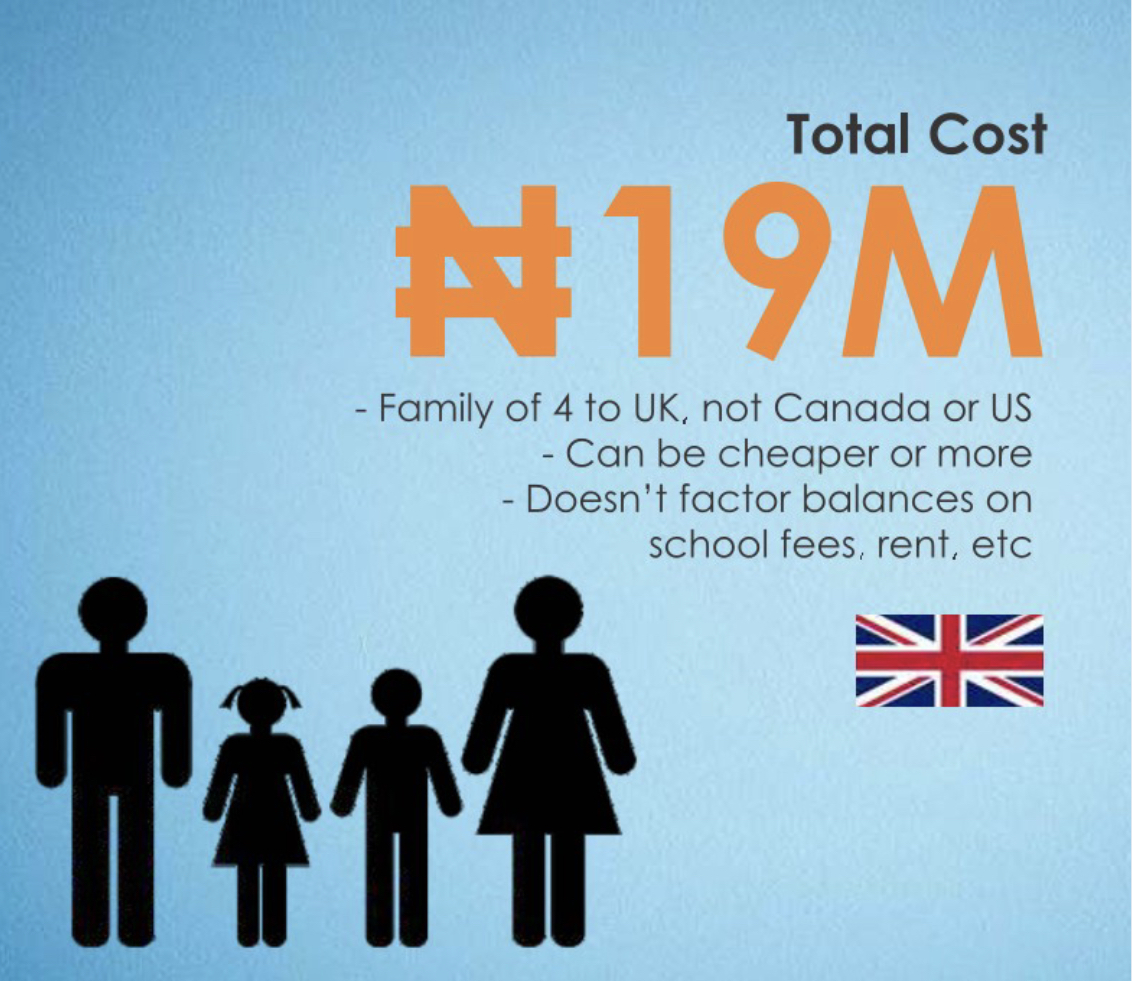 “Oremi, this relocation has cost me almost everything”
“You don’t want to know!” He further sighed “You don’t.”

Today, with the help and data from three(3) relocating friends, I compile the rough cost (slider below) for prospective relocating families (focus on UK) and a poem for my friend and Nigeria:

Oremi, I hope we meet again, as you japa to find fresh grain, to return if Nigeria again reigns?
God, will any leader ever end this drain? But prayers will be in vain, if in 2023, unwisely we vote again.

The number of Nigerians who received UK work visas, Bloomberg said, rose to 15,772 for the year through June, from 3,918 in the year through December 2019, the last full year prior to the pandemic, quoting a report by the UK Home Office released last month.

According to a Pew Research Centre study conducted in 2018, Nigeria tops the chat of people who plan to move to another country within the next 5 years with 48%, among the 12 countries sampled for the survey.

The survey also revealed that 55% of those who planned to leave Nigeria have gathered information about moving to another country, 34% have saved or borrowed money, 30% applied for necessary documents like a passport or Visa, and 14% have taken all necessary steps.

A new survey of more than 4,500 young people in Africa, aged 18-24, has found that 52% of them are likely to consider emigrating in the next few years, citing economic hardship and education opportunities as the top reasons.

The BBC spoke to five young people in Nigeria and South Africa who said they do not feel safe in their countries and lack access to work opportunities, but for those in Ghana the picture looks very different.

line
“The Nigerian insecurity is so appalling,” says 18-year-old Ayoade Oni from Lagos. This is one of the main reasons he wants to leave Nigeria.

Last year he was nearly kidnapped in “broad daylight”. He was on his way home from the phone repair shop when a gang approached him, demanding he hand over his belongings.

He resisted and was “walking very fast” to try and get away. He thought he had found refuge when he stumbled on a nearby shop with people inside who tried to lure him in, telling him he was safe with them.

But it was a trap.

Suddenly, a bus driver pulled up and warned him the people were “kidnappers”, instructing him to get inside the vehicle. “That saved me that day,” he recalls.

Nigeria is currently facing a kidnapping for ransom crisis, with perpetrators collecting millions of dollars over the years, according to a Lagos-based think-tank.

A “high unemployment rate, poor health sector, low standard of living [and] little to no job opportunities”, are the other reasons Mr Oni cites for wanting to leave the country.

As for eventually getting a job after he graduates with a degree in Computer Science, he is not optimistic. Most graduates are left with no option but to compete for the “few employment positions available, with most people being employed by connections or corruption”, he said.

If he left Nigeria, and relocated to Canada where he has his heart set on, he would have no intention of moving back. Most of his friends feel the same: “90% if not all of them” want out, he says.

The statistics from the African Youth Survey 2022, carried out in 15 countries by the South African Ichikowitz Family Foundation, back up Mr Oni’s pessimism.

Young Nigerians have the most negative opinion in the whole continent about the direction their country is headed, with 95% saying things are going badly. Of all those surveyed, just 28% felt positively about the trajectory of their nation.

he world needs to wake up and invest in Africa, so that young Africans do not feel they have to move abroad to achieve their dreams at the expense of their home countries, according to the man behind the survey, Ivor Ichikowitz.

“It’s bigger than a brain drain,” Mr Ichikowitz told the BBC Newsday programme. “This group of people, 18 to 24 year olds in Africa, are saying: ‘We are going to improve our lives, even if it means having to up and leave and go somewhere else.'”

He said the fact so many young Africans wanted to move abroad could cause a migration crisis, describing it as “alarming”.

In the previous edition of the African Youth Survey conducted before the pandemic, most of the young people interviewed wanted to stay in their home nation and build a life for themselves there, Mr Ichikowitz said.

It is in the interests of the whole world to keep young Africans, who estimates say will make up 42% of the world’s young people by 2030, “constructively engaged in Africa”, Mr Ichikowitz said.

That is exactly what some young people in Ghana who the BBC spoke to plan on doing.

Ghanaians feel the second-most positive on the continent about the future of their country after Rwanda, with 56% saying they are pleased.

Julius Kwame Anthony wants to stay in Ghana, saying it’s possible to thrive there
“I can make it in Ghana because even though there are not strong institutions, and our systems seem to be weak – the lack of these could also mean that a smart social climber can break those barriers,” says 24-year-old Julius Kwame Anthony, the former head of the National Union of Ghana Students.

“Relocating abroad may look rosy but nothing is really promised out there,” he continues.

Similar sentiments were echoed by 33-year-old businessman Ernest Larmie: “This is home, if I’m able to solve the problems here, when the next generation comes, they can also benefit ,” he says, questioning the logic behind moving abroad, just to help another country develop at the expense of your own.

‘Women are not safe’
But for others, passionate arguments about developing their community will not wash, and the trauma they have faced in their home country has left them itching to leave.

One young South African woman, who requested to remain anonymous, says the high crime rate in the country has made her want to emigrate, on top of her struggles to find a job since graduating last year.

She says she was raped in 2019 while walking from campus to her student accommodation and has not felt safe since.

Pre-pandemic, between 2018 and 2019, sexual assault and rape counted among the crimes in the country with the biggest increases.

“It just feels like the odds are against us as young women. Not only can we not roam the streets safely, we are also battling with unemployment.”

Another young South African woman, Mapula Maake, 23, agrees that the employment situation in South Africa is poor, and this is why she is thinking of moving abroad.

“Migration might be the only solution to this rather saturated job market,” she says.

Ms Maake describes it as a “national crisis” and pleads that “the government should be taking steps to invest in graduates”.