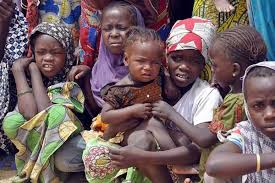 LAGOS – Nigeria faces worsening malnutrition in the northwest due to insecurity, high food prices and the impact of climate change, Medicines Sans Frontiers (MSF) said on Tuesday, calling for the region to be included in United Nations funding plans next year.

Gunmen have terrorised the northwest, killing and kidnapping people for ransom this year. Africa’s most populous nation is already grappling with an Islamist insurgency that has displaced at least two million people in more than a decade.

Insecurity has prevented some farmers from planting in a region now experiencing some of its worst flooding in years.

MSF said it had witnessed extraordinarily high numbers of children with malnutrition in five states across the northwest, where about 100,000 were treated for acute malnutrition.

“With increasing insecurity, climate change and global inflation of food prices in a post-pandemic world, we can only imagine this crisis getting worse,” Simba Tirima, MSF country representative in Nigeria, said.

“The Nigerian authorities need support to deal with a crisis of this magnitude.”

Humanitarian aid groups have largely focused their attention on the northeast, where Nigeria’s military is stepping up attacks against the Islamist insurgents.