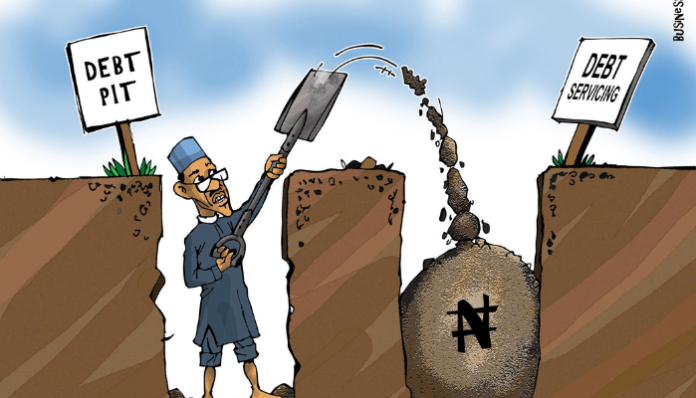 Let’s talk about the fast rise in Nigeria’s public debt stock as we dive into the growing constraints to revenue generation, urgent reforms which are required to restructure the FGN’s finances and the most obvious of them would be subsidy reforms, which are now projected to make up more than half of the fiscal deficit for next year.

It is no news to you again at this moment after Nigeria’s Debt Management Office (DMO) on Monday announced that Nigeria’s total public debt stock rose 2.98% or N1.24 trillion to N42.85 trillion (USD103.3 billion) as at the end of Second quarter of 2022 from N41.60 trillion reported in the first quarter.

The increase, as expected, was buoyed by the voracious borrowing spree by both the federal government and the sub-nationals for local financing.

A breakdown of the data obtained from the DMO website showed that total external debt stood at N16.62 trillion or USD40.06 billion at the end of the quarter and comprises 38.8% of the total stock.

On the domestic front, total domestic debt printed N26.23 trillion (USD63.25 billion) of which FG accounted for 79.9% (N20.95 trillion) of the total and the sub-nationals grew their debt stock to N5.3 trillion.

Nigeria’s inability to curtail its undesirable buildup of public debts and fiscal sustainability risks keeps it hanging on a fiscal cliff as the weakening local currency against the greenback and low or no earnings from crude oil rally occasioned by the Northern Europe impasse, continues to hamper its ability to service its debts.

This comes in the face of fund paucity; and, for a truth, no respite for FG’s debt levels as the trend of borrowing spree continues in the move to part-finance over N5 trillion deficit in the 2022 Appropriation Act as well as a new round of borrowings by State Governments and the FCT while we head into an electioneering year.

Elsewhere, debt service is likely to eat a large chunk of government revenues going by the current numbers for FG’s total revenues and planned expenses in its budgets for the year 2022 and the coming year which is an electioneering year.

This translates to a marginal reduction in the interest rate payment for government debts.

Against the backdrop that FG needs revamped fiscal rules without endangering its public finances sustainability, the debt office said at 23.06% (from 23.27% in Q1’22), Nigeria’s total external debt to GDP ratio stays within moderate levels of its self-imposed limit of 40%.

Thus, we opine that building greater fiscal buffers will help avoid debt crisis that could have some destabilizing effects on the overall sustainable growth of the economy.

Meanwhile, a downside is the debt service-to-revenue ratio which unabatingly has remained high in the face of FG’s weak revenue generation power over the years.

For sure, FG will continue the implementation of initiatives to drive revenue generation from both oil and non-oil sources respectively.

However, it is imperative to state that blocking revenue-leakages, promoting effective reforms and frameworks that are growth-driven and then revamping weak institutions to aid the enhancement of these reforms, are sacrosanct to achieving effect and sustainable public debt management

In our opinion, FG should cut governance cost, expenditure and scale down size of government to accommodate effective fund utilization while it increases its revenue sources.