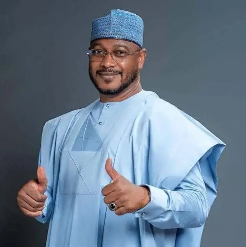 The governorship primary poll rerun was conducted after a Court nullified the primary election that produced him as party’s flagbearer for the forthcoming general election.

At the convention, 431 delegates from 147 wards across the 14 local government areas of the state converged on Gusau, the state capital.

The chairman of the election committee, Senator Hassan Felix Hayat, declared him the winner of the election, saying he polled 422 votes to defeat his opponents Alhaji Ibrahim Shehu Gusau and Hafiz Nahuche, who scored one vote each.

The agent of the ex federal lawmaker, Alhaji Ibrahim Shehu Gusau, and his supporters stormed out of the venue of the convention.

An aspirant, Alhaji Wadatau Madawaki, earlier stepped down for Dare and promised to support the latter’s candidature to wrestle power from the ruling All Progressive Congress in the state.

The chairman of the party in the state Dr Ahmad Sani Kaura expressed gratitude to the delegates.