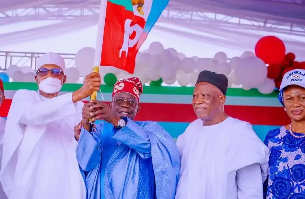 Sat, 24 Sep 2022 12:34:30 GMT
The ruling All Progressives Congress (APC) has finally unveiled its presidential campaign council for the 2023 election.

The 422-man list released by James Faleke, the Presidential Campaign Council Secretary, late Friday, has the presidential candidate and the party’s national chairman, Abdullahi Adamu, as deputy chairman 1 and 2 respectively.

As expected, the list has some elements of surprises and twists. While the name of Vice-President Osinbajo is conspicuously missing, that of Rotimi Amaechi, former Minister of Transportation, who like Osinbajo, battled Asiwaju Bola Tinubu for the presidential ticket, is on the list.

Rauf Aregbesola, Tinubu’s former ally and Minister of Interior is also on the list, despite the allegations by APC chieftains that he worked against the ruling party in the last Osun governorship election won by the Peoples Democratic Party (PDP).

However, Adebayo Shittu, former Minister of Communication, is not on the list. Shittu has been on the frontline of the campaign for Tinubu.