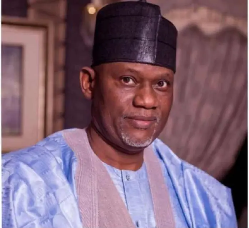 Suleiman Usman Hunkuyi, the governorship candidate of the New Nigeria Peoples Party (NNPP) in Kaduna State, says he will reinstate all the 313 sacked district heads in the state if elected governor in 2023.

Hunkuyi made this known on Thursday at the ‘Pastors Congress’ organized by the Southern Kaduna Christian Leaders Association (SCKLA) in Kafanchan.
He said reinstating the district heads was necessary because of the critical role they played in curbing security challenges.
“If elected governor, the first thing I am going to do would be to reinstate the sacked district heads. We know the important role they play in intelligence gathering as it affects security in our communities. Also, whenever there is dispute in their localities, they come in to address the situation,” he added.
On teachers sacked by the present government, the gubernatorial candidate pledged to set up a committee to review the decision.
He listed agriculture, security, infrastructure and education as areas he would prioritize if elected.
Earlier in his remarks, SCKLA Chairman, Apostle Emmanuel Kure, said the meeting was called to engage governorship candidates of various political parties on their plans for the zone and the state at large.
Kure explained that the candidates’ plans for the zone would enable the congress guide the congregations on the best candidate to support in the 2023 elections.
“The essence of the meeting is to hear how they intend to govern Kaduna State as it affects Southern Kaduna. This is to enable the congress educate and guide their congregations as to which direction the Lord will have us follow in the 2023 elections.
“This is an opportunity to meet the candidates and ask questions that will decide our future. It is meant to keep our voices as one, unite us before and after the elections and ensure a peaceful transition,” he added
He decried the neglect of the zone by successive governments in the state.
Kure said the era of using monetary inducement to win the support of the church was over, noting that only a competent candidate who had the zone’s best interest at heart would be considered.
He listed agriculture, education, infrastructure, health, traditional institution, political appointments and security as areas the candidates were expected to highlight.
According to him, the Christian leaders will aggregate the feedback from its members at the end of the meeting and then take a position.
The candidates who took turns to outline their vision and plans included Jonathan Asake of the Labour Party, Uba Sani of the APC and Timothy Adamu of the Action Alliance (AA).
Others were Suleiman Hunkuyi of the New Nigeria People’s Party and Andrew Duya of the All Progressives Grand Alliance (APGA).