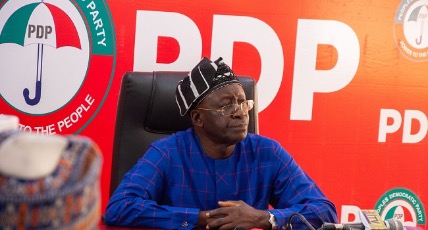 A chieftain of the Peoples Democratic Party (PDP), Bode George, has insisted that Senator Iyorchia Ayu resigns as the party’s national chairman.

He stated that while nobody was pressuring Ayu to vacate the office, it was a pledge the national chairman freely made in the build-up to the party’s presidential primary election.

“Let me try and educate the public on this issue; we are not talking about removing him (Ayu) or forcing him (to resign), he himself – Iyorcha Ayu – stated pointedly that peradventure if the presidential candidate emerges from the North [I didn’t say it, he said it publicly] that he would resign,” said George who was a guest on Channels Television’s Politics Today on Wednesday.

He explained that it would only be morally right for the national chairman to resign from his position after former Vice President Atiku Abubakar of the northern extraction emerged as the PDP presidential candidate.

George, who is also a member of the PDP Board of Trustees (BoT), explained that Ayu’s resignation was necessary to ensure the inclusivity, sensitivity, and balancing that the party’s founding fathers envisaged when the PDP was created.

President Muhammadu Buhari, according to him, is from the North and in his eighth year and it will not be proper for another northerner to succeed him, irrespective of his/her political affiliation.

“The issue we are talking about is a purely moral issue …if we use the same moral compass to allow him (Atiku) to contest at that time (because he is from the North and chairmanship had been zoned there), it means the presidential candidate must come from the opposite zone, which is the South.

“Now that you (Atiku) took up the ticket, Ayu himself stated completely that once the presidential candidate emerges from the North, he himself would be too happy to resign. So, why are we playing games?” the PDP chieftain queried.