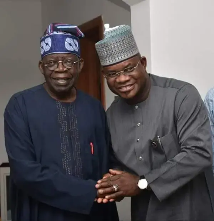 A Coalition of Student Support Groups for Tinubu/Shettima Candidacy under the umbrella of Supporters of Asiwaju Students Campaign Organisation has condemned the appointment of Governor Yayaha Bello as the National Youth Coordinator of the All Progressives Congress (APC) Presidential Campaign Council.

Addressing newsmen after their meeting at the Grandview Hotel in Oshogbo, one of the leaders, Folarin Tejumola, said the appointment of Governor Bello, who contested against Bola Ahmed Tinubu during the APC presidential primary, was not in the party’s interest.

“It is very pertinent to note that we frown against the recycling of leadership in Nigeria when there are many competent hands that can be given such tasks with the assurance to deliver.

“The APC needs to realise that the coming presidential election is not going to be business as usual and we need someone who can easily relate with the Nigerian youths and not someone like Governor Yahaya Bello, who is already part of the system and who in no way shows any affinity or association with the youth dilemma.”

But another group under the aegis of APC Young Stakeholders, said with Governor Bello, the youths would have a pride of place in Tinubu’s government.

Addressing journalists on Thursday in Abuja, the spokesman of the group, Aliyu Audu, said Governor Bello is the best man for the job.

He stressed that Bello’s appointment was a demonstration of Tinubu’s ability to identify individuals, regardless of religion, tribe or gender that have the wherewithal to deliver on any given task.