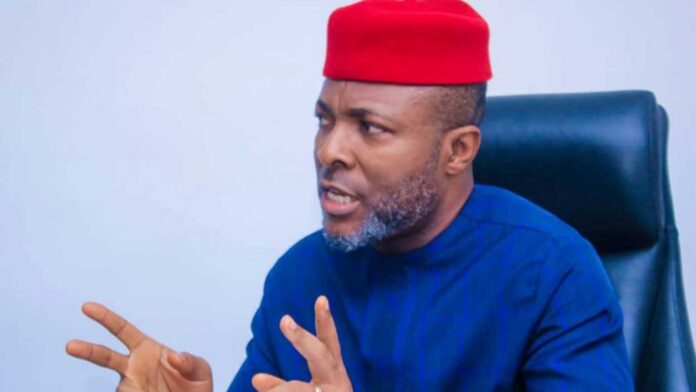 … As Uzodimma harps on synergy between arms of govt

Governor of Imo State, Senator Hope Uzodimma has harped on the need for greater synergy between the three arms of government.

He spoke Thursday night at the Banquet Hall of the Government House Owerri during a luncheon he held for the New Speaker of the Imo State House of Assembly, Rt. Hon Emeka Nduka and his colleagues.

It turned out to be an occasion that afforded the immediate past Speaker of Imo State House of Assembly, Rt. Hon. Kennedy Ibe, the opportunity to explain why he resigned his office.

Ibe, who represents Obowo State Constituency at the Imo State House of Assembly said he needed time to prosecute his campaign as electioneeeing for the 2023 general election draws closer, noting that his successor, Rt. Hon Nduka is most fitting to occupy the exalted office now “because he is not contesting the election.”

Governor Uzodimma told the gathering that includes political appointees, APC State executives and other heads of government agencies, that the coming together was a deliberate way of creating bonding for members of the three arms of government for greater productivity.

The Governor said he deliberately brought the entire arms of the Government together for them to “re-evaluate themselves and their performance in Imo politics and access their successes and failures.:

“Identity mixture has been the issue, yet within the party top brass, the decision and determination is to make the place called Imo State a friendly place to live.”

The Governor said that the target of the Party and its members is always to have a meeting point where they must agree and review their work and ensure they function well and efficiently.

Governor Uzodimma who described the day as special, thanked the leadership and members of the Imo State House of Assembly as well as the leaders of the State who have been with him since 2020 and reminded them that “democracy has come to stay and it will be better practised and consummated when the politicians, understand themselves better.”

He reminded all that as one political family they needed to operate as a network where people can identify and see them as those working together for a common interest and goal.

The Governor told the aggrieved members of the Party, who for no fault of theirs or anybody, did not clinch ticket at the primaries, that “it is no longer fashionable to go about complaining,” pleading with them and all those who are aggrieved to “consider the sense of reasoning, forgive and forget and join hands to achieve the bigger target of winning the elections for the party.”

He said as Governor he has been trying his possible best to put on ground some observable achievements needed by the candidates of the Party to convince the people of Imo State and even the opposition to support and vote for them during election, insisting that the gains were recorded through the 3R mantra of Rehabilitation, Reconstruction and Recovery.

Governor Uzodimma said as a leader his responsibilities include attracting respect and dignity to the Party and its members.

“However, in every strata there must be a head and as such the leader of the Executive is the head of the three arms of Government.”

He said it is “important the arms of government realize the need to forge a common front and a common objective that will help government of the day to realize its vision and mission.”

He reiterated his believe in the Nigerian project and urged the gathering to “wear your thinking caps and ask some pertinent questions of where we are, where do we want to go and how do we get to where we want to go?”

He added: “Nigeria is a Federation, the Igbos and the South East is only a Federating Unit. The rest of Nigeria has one third that can form a quorum and also have two third that can dissolve the meeting. The consequences of this are that Nigeria can move forward without us, therefore we need Nigeria more than Nigeria needs us.”

To the entire people of the South East, the Governor encouraged them to work hard and defend their positions today so that the “generations unborn will remember them positively.”

“Let us be remembered for what we did when we had the opportunity because we must leave Imo State better than we met it.”

He promised to continue to meet with the audience to bond more with them and urged them to go home and talk to the people at the Local Government level as Nigeria is theirs.

Governor Uzodimma told the audience that President Muhammadu Buhari has approved for the drainage of Orashi River to the Atlantic Sea and that the leadership of Nigerian Navy will be visiting Imo State soon for project management meeting.

“This must be supported because it is a way of boasting the economy and opening up the South East to the outside world through the Seaport.”

Addressing the audience, the new Speaker Imo State House of Assembly, Rt. Hon. Barr. Emeka Nduka described the luncheon as “symbolic, significant and awesome because of the host, the Governor of Imo State himself.”

Nduka thanked God who made it possible for his colleagues to elect him as their “Chief Servant” and thanked the Governor for accepting him as the Speaker Imo State House of Assembly.

He promised to leave up to the expectations of the Governor, his colleagues and Imo people in general.

Also, he pledged, on behalf of his colleagues, that the Assembly will continue to use all legal instruments to run the legislative affairs and churn out laws and motions that will give Imo people the best dividends of democracy.

In his own brief remarks, the immediate past Speaker, Rt. Hon. Kennedy Ibe affirmed that he resigned from the position to enable him face his electioneering and avoid distractions that may come up from the challenges of the office.

He told the audience that the process that led to the emergence of his successor was smooth and devoid of bitterness or rancour, and thanked his colleagues and the Governor for the massive support he got from them during the period he served as Speaker

In their goodwill messages, the Majority Leader and Member representing Owerri West, Rt. Hon. Kanayo Onyemechi, that of Owerri North, Hon. Philip Ejiogu and Hon. Ngozi Obiefule of Isu State Constituency, expressed their fervent support to the new Speaker whom they described as a “humble member of the House.”

Earlier while welcoming the audience, the Secretary to Imo State Government, Chief Cosmas Iwu said that, “as a family the Governor had thought it wise to ones in a while call his children together, look at their faces, interact with them and reason a way forward.”

Also in his brief remarks the Chief Political Adviser and Head Political Bureau, Barr Enyinna Onuegbu said the luncheon, though organized to honour the Speaker and his members, attracted all the key players in the 3-R administration, and thanked the Governor for approving the coming together and hoped it will yield the expected results.