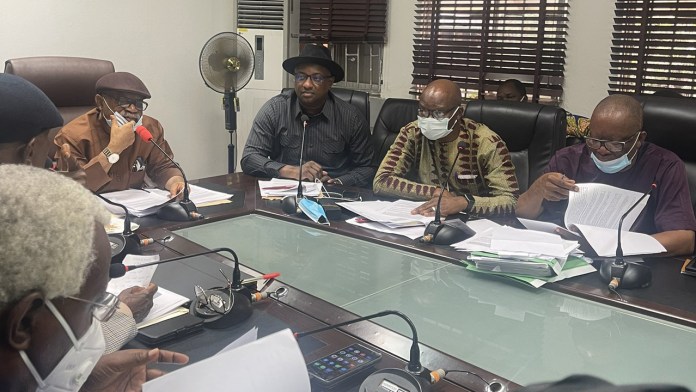 By Glory Abuh-Adejoh
Abuja, Sept. 16, 2022 The National Industrial Court on Friday fixed Sept.19 to deliver ruling on Federal Government’s prayer asking the court to order the Academic Staff Union of Universities (ASUU) to call off its seven months strike.

The matter which was first mentioned on Monday was adjourned until Friday for further mention before Justice Polycarp Hamman.

When the matter came up, Mr J.U.K Igwe SAN informed the court that going by its directive on Monday that the claimant should file its process latest by Tuesday, that they had filed two processes.

He added that the first one was motion on notice dated and filed Monday for an interlocutory injunction.

Igwe further stated that the claimant also filed on the same date an affidavit of facts in support of the referral sent by the Minister of Labour and Employment.

He also averred that some questions were raised with a full complement of a written address.

He also submitted that the defendant had been served with proof of service before the court.

The counsel said that however, as at the time the court was sitting, he had not received an response from ASUU.

Igwe proceeded to urge the court to take the applications as it was ripe to be taken, stating that the matter is of national interest and urgent as million of students have been at home since Feb.14.

Mr Femi Falana, SAN, counsel to ASUU in response acknowledged receiving process from the claimant and stated that they were already filing their reply in the court’s registry.

Falana added that the Minister of Labour and Employment lacked the power to ask the court in his referral to order the defendant to go back to work.

He also informed the court that ASUU will be meeting stakeholders in the House of Representative on Sept.20 to ensure that the matter is resolved.

Earlier Mr Ebuolu Adegoruwa SAN, counsel to Socio-Economic Rights and Accountability Project (SERAP) had raised the issue of joinder and consolidation of the suit, citing section 36 of the 1999 constitution to fair hearing

Adegoruwa said relief 3 of their application is for stay of further proceeding for the court to determine whether or not they will be a party in the suit.

He added that the process had been served on the claimant on Thursday.

He proceeded to seek to withdraw an earlier filed process dated Monday and sought to replace it with the one served on Thursday.

Igwe in response objected to Adegoruwa’s application, stating that he was in receipt of the application he filed on Monday, that was served on them on Thursday by 5pm.

He also argued that it was the same application Adegoruwa was applying to withdraw.

He added that he had not received any process dated Thursday as claimed by Adegoruwa.

Adegoruwa in response stated that there was proof of service of said application on the Attorney-general of the Federation on Thursday.

Falana said he was not objecting to Adegoruwa’s application seeking to be joined as a party in the suit and for the suit to be consolidated with the other one filed by SERAP as a claimant.

The court after listening to the submissions of counsel ruled that the application was not ripe to be taken as it was served at the Attorney- general’s office on Thursday.

The court in addition stated that the application for interlocutory injunction will be taken first on Sept. 19 by 11am.

The judge therefore adjourned the matter until Sept.19, for hearing .