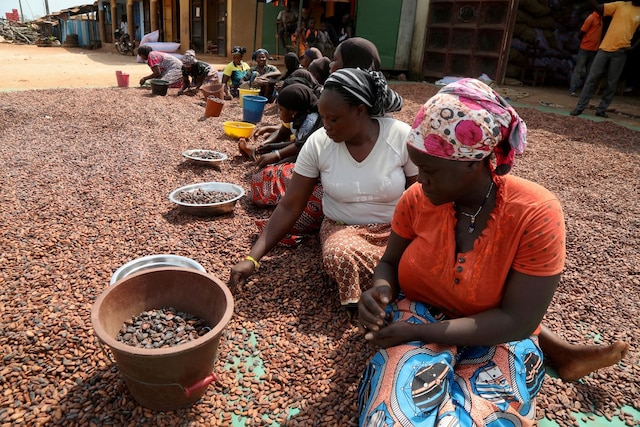 ABIDJAN, Sept 12 (Reuters) – Ivory Coast has starting selling cocoa contracts for the 2023/24 season with a non-negative premium for the first time in three years, industry sources said on Monday, as the regulator seeks to support farmers.

The country’s regulator, the Coffee and Cocoa Council (CCC), sold 25,000 tonnes in cocoa export contracts on Friday to global commodities trader Cargill Inc (CARG.UL), two sources at the CCC and one at Cargill told Reuters.

Ivory Coast and Ghana, the world’s biggest cocoa producers, impose two premiums on their beans that are meant to increase the prices paid to impoverished farmers to boost their income. However, one premium, known as the origin differential, had dropped below zero in recent years under pressure from traders, effectively cancelling out part of another premium, the $400 per tonne Living Income Differential (LID).

The two West African countries teamed up and said in July that they would no longer sell cocoa with a negative origin differential, as they step up efforts to tackle farmer poverty. Ivory Coast raised its origin differential to zero in August from -125 pounds sterling per tonne previously, and the contracts with Cargill are the first ones it has sold with the new premium. read more

“On Friday we bought 25,000 tonnes with the CCC for the next season (2023/24), showing our commitment to support producer countries in their efforts to offer a decent price to farmers,” a Cargill source said on condition of anonymity.

Two sources at the CCC confirmed the deal, saying it was the first sale of the 2023/24 season and the first time Ivory Coast has sold cocoa contracts with a non-negative origin differential since the LID was introduced in 2019/2020.

“These first sales of the 2023/24 season reaffirm that the industry has understood our position,” said a source at the CCC.

“For us, there is no longer a question of selling cocoa to multinationals and chocolate makers with a negative origin differential as in the past. That’s over,” he said.

CCC director general Yves Brahima Kone is in Rome for a meeting of the European Cocoa Association (ECA), where he will pass on the message to manufacturers, the sources said.