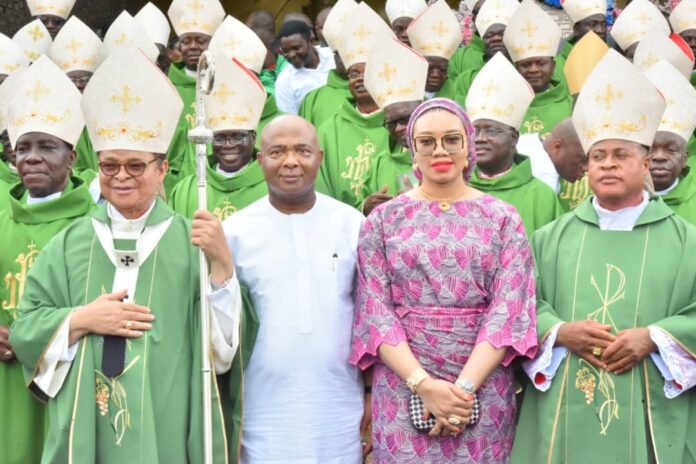 ….Advises the Church to be wary of partisan politics

Governor Hope Uzodimma of Imo State has advised the Church to be wary of partisan politics just as he admonished the clergy to resist the temptation of converting God’s houses and pulpits as soap boxes for political campaigns.

The Governor spoke on Sunday at the Holy Trinity Catholic Cathedral Orlu in Imo State on the ocassion of the opening session of the second plenary of the Catholic Bishops Conference of Nigeria (CBCN).

In what looks like a reminder to the Church and the clergy that their roles are cut out for them, Governor Uzodimma noted that they need to preserve the norms that make their moral authority inviolable.

His words: “Your Graces and Lordships, permit me to also point out, with every sense of responsibility, that I do not think it is right for some members of the clergy to convert God’s house and the pulpit to the soap box for campaigns for their preferred candidates or parties in an election season or anytime in the election cycle.

“Sadly, this has become the norm in many of our churches. My worry is that if the church drags itself into partisan politics, then it would have lost its moral authority to pontificate because it has made itself an interested party.

“Indeed, the church cannot be in the moral pedestal to preach against certain conducts of the society if it has not gone through purification by purging itself of those who are diminishing its authority.

“I believe that true sanctification can only come when the church presents itself as a living testament of good, impartial and temperate conduct. It is my sincere hope that one of your resolutions from this conference will be to condemn members of the clergy who use their positions and the church for political ends.

“In the same vein, some priests under your watch have through inciting sermons also taken it upon themselves to inflame passions, instead of abating them. In addition, I have noticed with dismay that some members of the clergy have also become open canvassers for separatism and secession.

“Sadly, they also use the sacred pulpit to do this. This should not be the case. The need for the church to remain on high moral standards includes abstaining from fiery comments that seem to highlight and promote our differences rather than on the things that unite us.”

Governor Uzodimma pleaded with the Catholic bishops to take a critical look at the concerns he raised as they begin their meeting, noting that for years since the birth of CBCN, their position has always been taken seriously by the society.

He added: “This conference is holding today because Nigeria, though beset by insecurity in some parts, is not in a state of war. No matter the imperfections of our republic and democracy, we are still better off in a united country. To the glory of God, we have an increasing number of political leaders who are committed to addressing these imperfections, especially as it concerns equity and justice, so we can build the perfect nation we all desire.

“And I can assure you that it is only a matter of time before this is achieved. On their part, Church leaders should continue to promote the unity of the country and not its division.

“I wholly understand that priests have the right and duty to hold our leaders and governments accountable, and nobody will ever stop a priest from condemning the ills in the society, including bad governance and corruption. My position should not be misinterpreted as an attempt to rob them of this moral authority which they have enjoyed since the beginning of time.

“I, therefore, appeal to your Graces and Lordships to bring up these concerns of mine in the course of your deliberations during the conference. It is important that you reaffirm the Church’s neutrality on political matters and, thereafter, caution the priests not to dabble into partisan politics. Above all, they should also desist from fanning the embers of disunity in the country.”

The Governor reminded the bishops that contrary to the false information they were fed with on social media, they are now in a better position to know that peace has actually returned to Orlu and that the people are going about their businesses without molestation.

“Some of you must have heard so many stories about the security situation in Imo State and Orlu, in particular. I am glad that you have come here and you have seen things for yourselves, and you can now attest to the fact that normalcy has been restored in Orlu. I now leave you to judge for yourselves what the true situation of things is.”

While welcoming them to Orlu for the second plenary of the CBCN meeting, Governor Uzodimma said: “It is

remarkable that this conference, which was instituted almost 60 years ago, has now grown into a credible platform where the leadership of the clergy can hold dispassionate discussions on issues of national, and, sometimes, global importance. And, to your credit, at the end of each conference, you always come up with a communiqué in which you proffer solutions to the issues discussed. I truly admire and commend your steadfastness in this regard.”

“Let me reiterate that anytime the Catholic Bishops of Nigeria meet, the nation waits with bathed breath because your resolutions are always logical, rational and audacious. To your credit, your resolutions are usually widely circulated and well–received, and would continue to resonate in many quarters for weeks and months to come.

Thus, one can rightly say that since 1958 when this body was formed it has become the conscience of the nation, speaking truth to power and seeking peaceful resolutions to thorny issues. The evidence on ground therefore suggests that this body will continue to act as a moral compass in the affairs of Nigeria.”

He said he noted with gladness that the programme for this year’s conference includes intensive prayers for peace in the nation.

“This should be expected when the leaders of the church meet in this formal setting. Prayer, as we know, is the key to all challenges because it never fails to bring solutions. So, I commend the spirit of prayers as outlined in the conference programme.”

Continuing the Governor said: “I believe, however, that as spiritual leaders, we must not only be seen to be praying for peace in the country; we should also be seen to be advocates of peace and unity in real life. We have a huge responsibility, therefore, to also do those things that will truly contribute to national unity and progress. This way, our prayers would be seen to be consistent with our conducts.

“Often when we talk about corrupt and ineffective leadership in the land, Church leaders should not delude themselves that they are excluded. This is why it is important that the church must remain on a moral high ground to be able to preach on effective and honest leadership for the temporal authority.

It goes without saying, therefore, that this all important body can only continue to effectively discharge that sacred duty of serving as a moral compass for the nation if it refuses to be encumbered by internal contradictions and outright partisanship.”

He congratulated the Chairman of the CBCN, His Grace, Archbishop Lucius Iwejuru Ugorji and his team for the choice of Orlu as the venue of this year’s conference.

Governor Uzodimma also used the conference to thank members of the clergy for their relentless prayers for peace in Imo State.

He said: “In spite of the efforts of our security agencies to restore peace in the state, I know for a fact that it took some Divine intervention to secure and protect our state from the evil machinations of our detractors. I have no doubt that this miracle was made possible by the prayers of religious leaders, including the lay faithful.

I say this because I am a firm believer in the sovereignty of the Lord as emphasised in Psalm 127: 2 which says ‘Unless the Lord builds the house, the builders labour in vain, and unless the Lord watches over the city, the watchmen stand guard in vain.'”

Governor Uzodimma spoke about himself as a baptised Catholic, who has every respect not only for the Church, but for the priests and the entire leadership.

“As my spiritual fathers, I draw a lot of inspiration from you, individually and collectively. Thus, I would be sad to witness anything that tends to weaken or erode your authority and reverence.

Finally, I am sure that the current leadership of the Catholic Bishops Conference of Nigeria will work harder to strengthen its arms to make them responsive to the yearnings of the faithful. Going by your programmes, I am also hopeful that you will address some of the contending and contemporary issues in our country today. As always, I have no doubt that your goal is to make Nigeria a better place not only for Catholics, but for every Nigerian.”

Earlier in his opening address, Archbishop Ugorji noted that some of the issues that the Conference will deliberate upon include; insecurity, the forth coming general election, corruption in the country, unemployment, youth restiveness and general affairs in the Catholic Church.

In his remarks as Chairman of the occasion, Dr. ABC Orjiakor among other things pleaded with the Catholic leadership to help secure family lives in the society today that is being threatened by divorce.

Orjiakor further admonished them to devote their time to praying fervently for the nation so as to overcome most of the things plaguing her currently even as he solicited a healthier relationship between the bishops and the Laity.

Goodwill messages also came from the Primate of the Church of Nigeria, Anglican Communion, Archbishop Henry Ndukuba who was represented by the Anglican Archbishop of Owerri Ecclesiastical Province, Bishop David Onuoha and from the President of Christian Association of Nigeria (CAN).

Earlier at the Mass, the Cathedral auditorium was filled with the high and might from Orlu and beyond from Imo State.