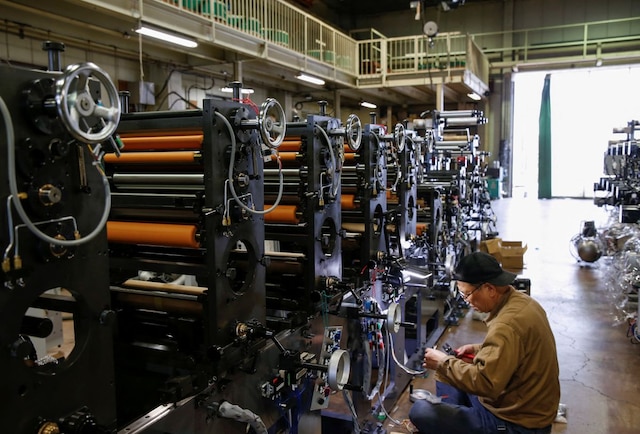 Manufacturing activity was weak in countries ranging from Germany to Britain to China in a sign sluggish demand was adding to headaches for companies already suffering from lingering supply constraints.

Advertisement · Scroll to continue
Meanwhile, major central banks are expected to continue aggressive interest rate hikes and that is also dampening optimism through growing fears of an outright slump.

“We are forecasting a recession in the euro zone and one in the United States next year. Whether that extends into a global recession remains to be seen,” said Peter Schaffrik at the Royal Bank of Canada.

There was however some relief for factories struggling with surging costs as weakening demand is having the side-effect of easing price pressures. Input prices fell in China and Taiwan for the first time since May 2020, and increases were generally slowing elsewhere.

Advertisement · Scroll to continue
South Korean manufacturers saw input prices rise in August by the slowest rate in 19 months, and average input costs faced by Taiwanese goods producers fell for the first time since May 2020.

In the euro zone the input prices index remained well above its long-term average but did fall to its lowest reading since the start of last year.

Still, manufacturing activity across the currency union shrank for a second month in August, while weak demand meant factories were unable to sell as much as they made and built up stocks of finished goods at a record pace.

In Britain, outside the European Union, factory output and new orders fell by the most in more than two years in the face of deepening uncertainty about surging inflation and the risk of recession at home and abroad.

The unexpectedly weak reading echoed China’s official PMI released on Wednesday, which was also below the 50-point mark.

Advertisement · Scroll to continue
“Fears of U.S. recession also aren’t helping. U.S. and Chinese economies are engines of global growth so when both of them are wobbling, that spells trouble for businesses.”

Export powerhouses were also reporting weakness. Japan’s factory activity grew at its slowest rate in nearly a year in August, while that of South Korea shrank by the sharpest pace in two years, PMIs for both countries showed.

In Germany, Europe’s largest economy and a major exporter, the manufacturing sector contracted for a second month.

Manufacturing activity also deteriorated sharply in Taiwan, with production and new orders both falling at the quickest pace since the initial wave of the pandemic in May 2020.

The final au Jibun Bank Japan Manufacturing PMI fell to 51.5 in August from 52.1 in the prior month, marking the weakest growth rate since September 2021. read more

South Korea’s PMI fell to 47.6 in August from 49.8 in July, remaining below the 50 threshold for a second month and hitting its lowest point since July 2020. read more

India’s factory activity continued to grow robustly in August thanks in part to a boost to output from easing input cost inflation, the country’s PMI showed. read more

Southeast Asia remained a bright spot in the region with manufacturing activity growth in Indonesia, the Philippines and Thailand accelerating, while Malaysia’s growth slowed slightly, the PMIs showed.