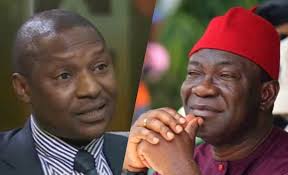 The Igbo sociocultural group, Ohanaeze Ndigbo Worldwide, Sunday flayed the Attorney-General of the Federation and Minister of Justice, Abubakar Malami, for saying the Federal Government would not interfere in the UK’s trial of a former Deputy Senate President Ike Ekweremadu over alleged organ harvest in London.

Malami had, on Thursday, told journalists in Abuja that “it has never been the tradition of the Nigerian government to interfere in anything judicial, local or international”.

But Ohanaeze, in a statement yesterday by its spokesman, Alex Ogbonnia, said: “Sovereigns usually interfere to save their citizens in foreign countries”.

It said Ekweremadu’s case was quite different because he had made a full disclosure to the UK High Commission that the donor, David Ukpo, was undergoing medical investigations for a kidney donation to his daughter

“In fact, it is the mosaic of cultures and the liberty for groups or nations to exercise their cultural rights that form the basics of international relations. To this end, sovereigns usually interfere to save their citizens in foreign countries.

“In the case involving Ekweremadu, it should be recalled that the former Deputy President of the Senate had written to the UK High Commission to support a visa application of a ‘donor’ listed as David Ukpo Nwamini.

“Every dispassionate Nigerian knows that the practice of organ harvest has over the years become a Nigerian provenance and of course it is not viewed as unlawful so long as there is a mutual agreement between the parties involved.

“It is in the context of cultural relativism and the premium placed on their citizens’ welfare and national pride, that countries deploy their diplomatic weights and resources to ensure their citizens obtain justice and even reprieve in a foreign land, no matter the gravity of the offence.”