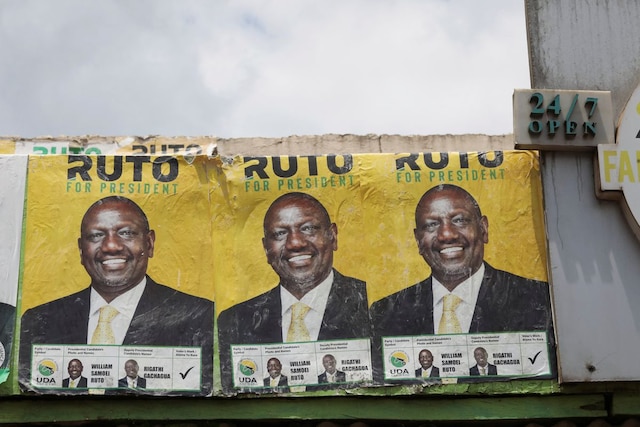 NAIROBI, Aug 14 (Reuters) – Kenya’s Deputy President William Ruto has edged ahead in a tight presidential race, according to official results reported by Kenyan media on Sunday, as more riot police were deployed inside the national election tallying centre after scuffles and accusations by party agents.

The fracas underscored fraying tempers and high tensions within the national counting hall as the country waits for official results from last Tuesday’s election. There were wry digs online over the melee from citizens pointing out that the rest of the nation is waiting patiently.

Advertisement · Scroll to continue
In the presidential race, official verified results reported by the Nation media group showed Ruto taking 51% of the vote, ahead of left-leaning opposition leader Raila Odinga who had 48%.

Confusion over vote tallying in the media and the slow pace of progress by the electoral commission have fed anxiety in Kenya, which is East Africa’s richest and most stable nation but which has a history of violence following disputed elections.

Advertisement · Scroll to continue
Reuters was unable to get access to the official running vote tally for the presidential race on Sunday. A live feed displaying the results at the national tallying center had disappeared hours earlier.

When asked about the tally, a spokeswoman for the commission referred Reuters to the live feed. Other electoral officials said they were unable to provide the information.

Officially verified results on Saturday, with a little more than a quarter of votes counted, put Odinga in the lead with 54% of the vote while Ruto had 45%.

Advertisement · Scroll to continue
The winner must get 50% of votes plus one. The commission has seven days from the vote to declare the winners.

A Reuters tally of 255 out of 291 preliminary constituency-level results at 1200 GMT on Sunday showed Ruto in the lead with 52% and Odinga at just over 47%. Two minor candidates shared less than a percent between them.

Reuters did not include 19 forms in the count because they lacked signatures, totals, were illegible or had other problems.

Advertisement · Scroll to continue
The preliminary tally is based on forms that are subject to revision if any discrepancies are discovered during the official verification process.

CHAOS AT THE COUNTING HALL
Odinga and Ruto are vying to succeed President Uhuru Kenyatta, who has served his two-term limit. Kenyatta fell out with Ruto after the last election and has endorsed Odinga for president.

Advertisement · Scroll to continue
Kenyatta leaves power having laden Kenya with debt for expensive infrastructure projects and without having tackled the endemic corruption that has hollowed out all levels of government. The next president will also take on rapidly rising food and fuel costs.

Ruto’s strong showing reflects widespread discontent with Kenyatta’s legacy – even in parts of the country where the president has previously swept the vote.

Advertisement · Scroll to continue
Large numbers of Kenyans also did not vote, saying neither candidate inspired them.

On Sunday, Ruto’s party member Johnson Sakaja won the governorship of the capital Nairobi, the wealthiest and most populous of the 47 counties.

TENSIONS AT TALLYING CENTRE
As the tight race continued, party agents have grown increasingly agitated at the tallying centre, known as Bomas. Late on Saturday, Raila Odinga’s chief agent Saitabao ole Kanchory grabbed a microphone and announced “Bomas of Kenya is a scene of crime,” before officials switched off his microphone.

Advertisement · Scroll to continue
Party agents scuffled with each other, with police and with election officials, at one point trying to drag one official outside.

The scenes, broadcast on national news, were met with bemusement by Kenyans, who urged their leaders to grow up.

“The reckless behavior at Bomas by so-called leaders, which can fast ignite the country, must be called out,” tweeted Alamin Kimathi, a human rights activist. “Let the drama end. Let the process continue.”