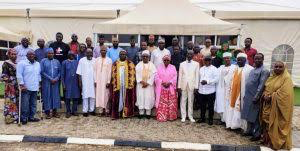 By Ishaq Zaki
08164134930
Gusau, Aug. 11, 2022 (NAN) The Zamfara House of Assembly on Thursday passed a bill seeking to upgrade the state School of Nursing and Midwifery to College of Nursing Sciences.
This followed the adoption of the House Committee on Health at Thursday’s plenary in Gusau.
Presenting the report, the Chairman of the Committee, Mr Abdulnasir Gayari (APC-Gummi 2) appealed to the lawmakers to agree on the bill so that it would be given its third reading.
After deliberations, the Speaker Malam Nasiru Magarya, directed the clerk of the house, Alhaji Shehu Sa’idu to give the bill its 3rd reading.
“With this development, the State School of Nursing and Midwifery has been upgraded to the status of College of Nursing Sciences,’’ he said.
Magarya commended the committee for doing a good job which led to timely passage of the bill.
Meanwhile, a bill for domestication of Violence Against Persons Prohibition Act, scaled second reading at plenary.
The bill was sponsored by Deputy Leader, Nasiru Bello-Lawal (APC- Bungudu West).