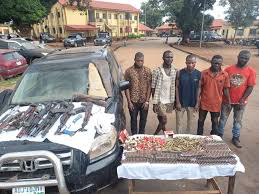 Abakaliki, Aug. 9, 2022 (NAN) The Police Command in Ebonyi, has intercepted a two-man armed robbery gang with a Toyota Lexus car in the state.

This is contained in a statement in Abakaliki on Tuesday by the Command Spokesperson, SP Chris Anyanwu.

The statement said the suspects were arrested by Police personnel through a coordinated effort with soldiers at the boundary area of Ebonyi, and indigenes of Onunwakpu in Izzi Local Government Area.

“On Aug. 6, the duo waylaid one Paul Kelechi, a 26-year old man, residing at No 3 Ominyi Street, Aguogboriga, Abakaliki.

“As Kelechi drove into his compound. The hoodlums, armed with two short guns, beat and tied him up, after which they zoomed off with his LEXUS ES 330 Saloon car with Reg No. ENU 772 MM.

“As soon as the information got to the Police Command, all Tactical teams and Divisions within the metro were alerted and the suspects were tracked and pursued up to Ukwuakpu village, in Izzi.

“In Izzi, they were eventually stopped by soldiers within All Saints’ Catholic Church, Ukwuakpu.

The hoodlums took to their heels and scampered into the bush. The villagers who heard exchange of gunshots, observed the situation, aided the Police and soldiers in combing the bushes.

It said the vehicle was recovered and the suspects were taken to custody.