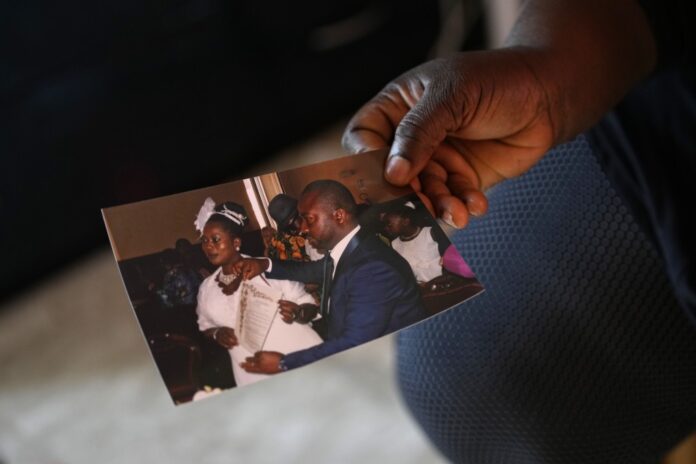 CIVITANOVA MARCHE, Italy — Two marches Saturday in a well-to-do Italian Adriatic beach town both sought justice in the brutal daylight killing of a Nigerian man at the hands of an Italian stranger but were divided by one word: Racism.

One march by Nigerians living in Italy’s Macerata province was led by victim Alika Ogorchukwu’s tearful widow and joined by two of his brothers. Organizers of that march said they did not want the search for justice to be clouded by accusations of racism that they feel cannot be proven.

The second march, along same route an hour later, was led by Black Italians from all over Italy who demanded that Italian authorities reverse themselves and recognize the role that race played in the July 29 killing.

“Not naming racism won’t help us understand how to defeat it. Because racism exists in Italy,” Selam Tesfaye, a Milan-based immigrant activist, told the second crowd of about 100 people. “If someone in Civitanova wants to explain why this is not racism, we are here.”

A widely circulated video shows the Italian man wrestling Ogorchukwu to the ground and strangling him. One man’s voice can be heard shouting for the attacker to stop, but no onlookers intervened physically, adding a layer of public outrage over their apparent indifference.
Police arrested an Italian suspect, Filippo Ferlazzo, 32, but quickly ruled out a racial motivation for the attack. The finding was confirmed by prosecutors who did not include racial motivation in the charge sheet, according to Ferlazzo’s lawyer, Roberta Bizzarri.

According to police, Ferlazzo first struck Ogorchukwu with a crutch the vendor used after pursuing the Nigerian 200 meters (yards) down a shopping street lined with high-end boutiques. Some accounts said Ogorchukwu had complimented Ferlazzo’s companion while trying to make a sale or ask for spare change. Others said he had touched the companion’s arm.

Townspeople have accepted the official version of events, attributing the Nigerian man’s death to an insistent street-seller unfortunately clashing with a man who has a court-documented history of mental illness.

“This is not a racist city,’’ newsstand owner Domenico Giordano said. “This is an open city. If you behave well, you are welcomed and even helped.”

People have left flowers and condolences on the sidewalk where Ogorchukwu was killed, in front of a beachwear boutique that was closed for lunch at the time. Store owner Laura Latino said she has received negative comments from as far away as Houston, accusing her of standing by and doing nothing when she wasn’t even there.

‘’Be careful about judging a city of 45,000 people,’’ Latino said, adding that false rumors were “ruining the reputation of the city.”

City officials have expressed concerns that the killing was being politicized ahead of Italy’s early parliamentary election on Sept. 25.

Samuel Kunoun, a Nigerian union activist who organized the march with the victim’s family, said he does not believe the attack was racially motivated. Still, the role of race in the case is so charged that he kept the word “racism” off banners in the march that attracted 200 people, mostly Nigerians.

“We don’t have to mix it with racism. What happened is that someone who is not normal killed our fellow Nigerian,″ Kunoun said. “We want this boy to pay for what he has done, to be in prison for life. That is our justice.”

But a manifesto for the second march, billed as Italy’s first-ever organized by Black Italians, lists the recognition of the role of race in Ogorchukwu’s killing as chief among 11 demands. Some 30 organizations said they would seek to join the prosecution as civil complainants.
Ogorchukwu’s widow, Charity Oriakhi, is reluctant to say the killing was racially motivated.

“It is just someone who is wicked,” Oriakhi told The Associated Press.

She said both she and her husband had always felt welcome in Italy and that he never recounted negative interactions when he was out selling. In fact, she said, he often came home with gifts from Italians for the couple’s 8-year-old son.

The pair met in the Tuscan town of Prato about a decade ago, shortly after Ogorchukwu’s arrival in Italy, and later resettled in the Marche region in an apartment above a marble workshop in the small hillside town of San Severino.

The Nigerian government has condemned Ogorchukwu’s death and its foreign ministry has urged Italian authorities to “bring the perpetrator of the heinous act to book without delay.”

Recent Stories from ABC News
Not all Nigerians in Macerata province are denying a racial element.

“The word racism cannot be minimized because it exists,’’ said Daniel Amanze, who arrived in Italy from Nigeria as a student 40 years ago. He said he saw racism becoming more “obvious” in recent years as some politicians scapegoat immigrants to cover “for their poor administration.”

Amanze said Ogorchukwu’s killing renewed a sense of fear among Africans living in the Marche region that had started to dissipate following two other racially motivated attacks. One was a 2018 shooting spree by a far-right political activist targeting Africans in Macerata that wounded six. The other was the 2016 death of a Nigerian man, Emmanuel Chidi Nnamdi, who was attacked after defending his wife from racial abuse in the town of Fermo.

Ogorchukwu used a crutch because a car struck him while he was on a bicycle a year ago, leaving him with a limp. The family’s lawyer, Franceso Mantella, said the street vendor continued to hawk wares, from tissues to straw hats, even after an insurance settlement provided a bit more financial security along with Oriakhi’s job cleaning a train station.

The widow said she last saw her husband when he gave her a sandwich at the train station on the day he died. She is haunted by the video and keeps the TV at home off so their son doesn’t see such images.

“I saw the video,’’ she said, mimicking the attacker’s stranglehold on her husband. “What hurts me most is there are people circled. They do a video. No one to help. I wish someone rescued him. Maybe he would not be dead.”