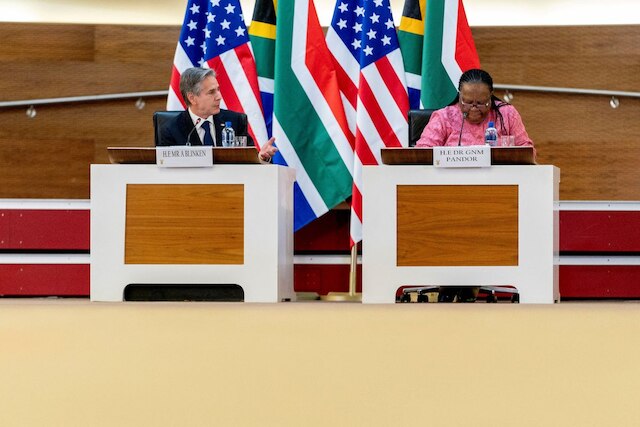 “The United States has an abiding interest in ensuring the region remains open and accessible to all, and that governments and publics are able to make their own political choices, consistent with international obligations,” the White House document said.

It expands on a November speech by U.S. Secretary of State Antony Blinken first laying out the Biden administration’s approach to Africa. Its release comes as Blinken is in South Africa and visiting two more African countries this week.

In November, Blinken said Washington would have to do things differently to help Africa with its infrastructure needs and it was time to stop treating the continent as a subject of geopolitics and rather as a major player on its own. read more

The new paper said that in line with the 2022 U.S. National Defense Strategy, the Pentagon would engage with African partners “to expose and highlight the risks of negative PRC and Russian activities in Africa,” referring to China by the initials of its official name.

“We will leverage civil defense institutions and expand defense cooperation with strategic partners that share our values and our will to foster global peace and stability,” it said.

Washington would also “review and reinvest” in ways to engage with African militaries, especially in programs that help build institutional capacity, combat corruption, and advance reforms.

“Effective, legitimate, and accountable militaries and other security forces are essential to support open, democratic, and resilient societies and to counter destabilizing threats, including in Africa,” the paper said.

Washington would work to build African capabilities in combating climate change and with governments and regional bodies, including the African Union, to support sustainable development “accelerators,” it said.

These included digitalization of financial services and records, investments in health systems and improvements in supply chains for critical commodities.

On the tech front, the paper said Washington would work to ensure affordable access to the Internet, while the U.S. Agency for International Development would seek to facilitate access to online courses.

The document said U.S. allies and partners in Europe, the Middle East and the Indo-Pacific considered Africa integral to their national security, and were committed to working with Washington.

China, by contrast, saw the region “as an important arena to challenge the rules-based international order, advance its own narrow commercial and geopolitical interests, undermine transparency and openness, and weaken U.S. relations with African peoples and governments,” the paper said.

Russia saw Africa as “a permissive environment for parastatals and private military companies, often fomenting instability for strategic and financial benefit,” it said.

Africa needs billions of dollars a year for roads, railways, dams and power and in the last decade has received huge sums from China, which generally does not tie money to political or rights-related conditions.

Washington has characterized Chinese lending as predatory and leading to potential debt traps, and has focused on facilitating private investment, but officials acknowledge it needs to do more speed up assistance.

The Biden administration has been criticized by some as inattentive to Africa: a common complaint about U.S. foreign policy but one that has rung louder since China deepened its political and economic roots on the continent.

Biden has though struck a different tone from former President Donald Trump, who disparaged some African nations and barred travel from six of them.