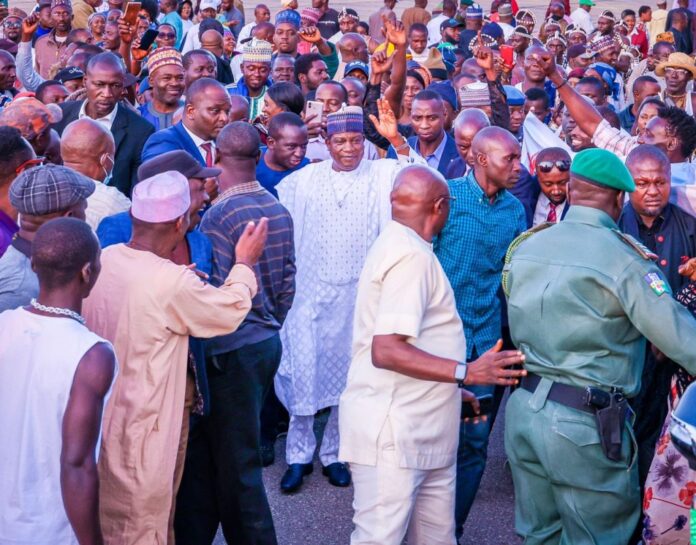 The Director General of APC presidential campaign ,Gov Simon Lalong, received by party members and supporters, at Yakubu Gowon Airport Heipang, near Jos, after the announcement of his appointment

Gov Simon Lalong, the Director-General of the All Progressives Congress (APC) party presidential campaign, said that he would foster unity in Nigeria while discharging his duties for the party.

The D-G stated this at a news conference on Thursday, when he was received by APC members and supporters at the Yakubu Gowon Airport Heipang near Jos.

The APC National Chairman Adamu Abdullahi, earlier presented Gov Lalong of Plateau to President Muhammadu Buhari, as the DG of the party’s presidential campaign organisation for its candidate Bola Tinubu and his Vice, Kashim Shettima.

Lalong said APC presidential campaign would prioritise issues that promoted national development, and urged Nigerians to elect leaders who will facilitate the process.

He implored Nigerians against using ethno-religous affiliation and parochial interests in selecting the leadership of the country.

”Nigeria is one nation, the challenges we have is not for a Muslim or Christian because we have common challenges,” he said.

He assured Nigerians of his capacity to lead the APC presidential campaign, especially with his current position as the Chairman of the Northern Governors Forum.

Lalong described his new position as a pride to Plateau, and a demonstration of the confidence bestowed on its people for their labour for APC.

He appealed to Plateau people and Nigerians to support the party in delivering its Presidential candidate and other candidates for elective positions at various levels successfully.

“The entire soul of APC and its campaign structure is put in trust to the people of Plateau.

“Know that they expect confidence in you to deliver the president to bring change and development in Nigeria,” he said.

He expressed confidence of ensuring APC wins the Governorship elections in Plateau, in addition to other elective positions.

The governor said he would be working with a formidable team at the state and the national levels to ensure the party’s success.