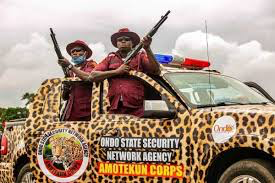 The state’s Commander of Amotekun, David Akinremi, who disclosed this in Abeokuta, said the trio of Azeez Wasiu, Azeez Adeyemi and Atunrase Tobi were arrested in Ijebu Igbo for conspiracy, housebreaking, theft and unlawful possession of firearms.

He said Wasiu and Adeyemi were arrested at the residence of one Alalukurani Amidu at No 3, Ipase Street, Ojowo, Ijebu Igbo, Ogun State, where they gained entrance through the visitors’ toilet and stole household items.

He said, “On interrogation, the two suspects confessed to their membership of the Eiye cult group, having been initiated at different times in 2020 and 2021.

They also admitted being members of a robbery gang operating in some parts of Ijebu-Ode and gave the name of other members of the gang as Atunrase Tobi, Balogun Lanre and Adesanya Yussuf, while a locally made pistol was recovered from them.’’