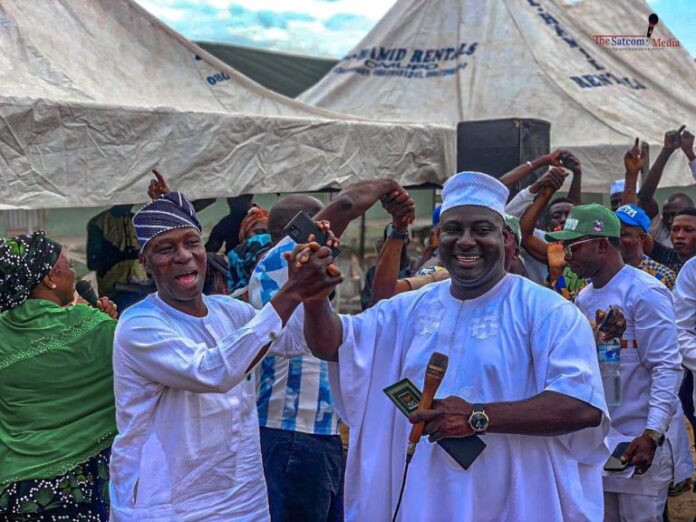 Omupo (Kwara), Aug. 4, 2022 Mr Gbebga Oyekunle Power, a chieftain of the All Progressives Congress (APC) in Kwara has defected to the African Democratic Congress (ADC).

Naija247news reports that Power, a philanthropist and founder of Gbenga Power Foundation, also picked ticket for the Federal House Representatives seat for Offa/Oyun/Ifelodun Federal Constituency in the upcoming general elections.

Speaking at St. Michael Primary School, Omupo in Ifelodun Local Government Area of Kwara, Hon. Powers said he has been a philanthropist to his people and has committed millions to the upliftment of many.

He pledged to dedicate himself to serving the community and Kwara as a whole, while thanking his teeming supporters.

Also a community leader and politician in Offa Local Government Area, Mr Kanmi Adetunji described the turn out at the political event as a positive signal for the philantropist’ House of Representatives’ bid.

“You can see for yourself. Even if a governorship aspirant records this type of huge turnout of supporters and admirers at his political rally, he will be reassured that truly his people are behind him.

“For us, it is a pay back time. Hon Gbenga Power has served us and impacted positively on the people of his consttutency all these years. Now is the pay back time. We owe him this. He earns our support.

Also Prince Funsho Ladipo, a United Kingdom based community leader and Elder from Ifelodun Local Government Area, expressed satisfaction at the turn out of Power’s teeming supporters, noting that it cannot have been otherwise.

”Honourable Gbenga Power is our true representative and the event of today bears vivid testimony to this fact.

“While a contestant needs the platform of a political party to contest, it is also a statement of fact today that a true man of his people will win election hands down, irrespective of which party he belongs. Gbenga Power comes prepared for this race and victory is certain by God’s grace,” he said.

Naija247news reports that the gathering of ADC supporters and beneficiaries of the philantropist programmes had in attendance ward leaders, community elders and women leaders.

Others are coordinators of the Gbenga Power Foundation and representatives of professional and artisan groups in Ifelodun, Offa and Oyun LGA of the state.