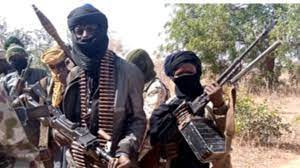 A yet-to-be-ascertained number of passengers have reportedly been abducted after kidnappers suspected to be herdsmen blocked the Enugu-Port Harcourt highway between Leru junction and Ihube axis.

Vanguard reports that the gunmen numbering about 30 and heavily armed, abducted the entire occupants of three buses. The bandits said to be heavily armed were said to have attacked a team of soldiers drafted to the scene following a distress call.

They reportedly set the military van on fire and wounded two soldiers before herding all occupants of three buses they abducted into the bush.

Confirming the incident, a youth leader in Umunneochi said the situation had heightened anxiety in the area. He said the bandits took advantage of the evening rain on Saturday to block the highway, causing gridlock that stretched to Leru junction as commuters mistook them for policemen on the roadblock.

According to him, some of the commuters who had alighted to verify the cause of the gridlock took to their heels when the bandits opened fire on a military van that came to save the situation.

He said some people sustained bullet wounds as motorists abandoned their vehicles and scampered for safety.

”It happened at the expressway between Ihube and Umunneochi. In Umunneochi proper, there has been a mass reduction in the number of such incidents but they have migrated to the border between Umunneochi and Imo State.

But Umunneochi Security Committee worked very hard. We are putting checkpoints and we have strengthened our vigilante, and have potentially repelled them.

I think it’s a sign of victory for us that they have left Umunneochi LGA and migrated further towards the express. They are at the boundary between Abia and Imo, precisely at Ihube.”