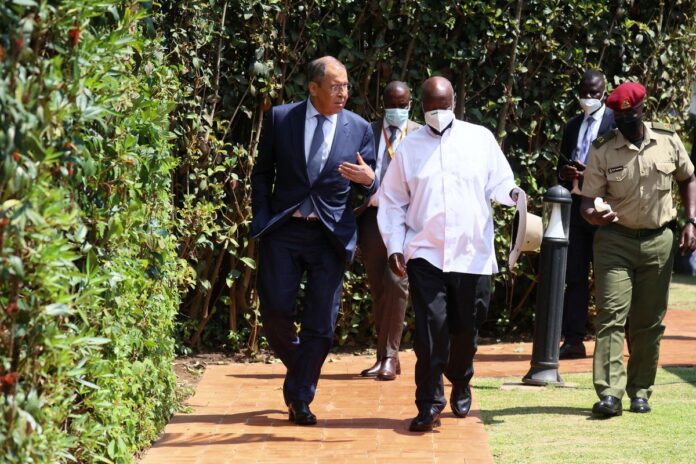 ENTEBBE, Uganda, July 26 (Reuters) – Ugandan President Yoweri Museveni said on Tuesday he saw no reason to criticise Russia over the invasion of Ukraine, extolling Russian-African friendship in remarks that will have delighted his visitor, Russia’s Foreign Minister Sergei Lavrov.

Speaking alongside Lavrov, who is on a four-nation African tour seeking support for Moscow at a time of confrontation with Western powers, Museveni praised Russia as a partner in the struggle against colonialism going back a century.

“If Russia makes mistakes then we tell them,” Museveni said, citing his participation in student demonstrations against the crushing of the Prague Spring by the Soviet Union in 1968.

“But when they have not made a mistake we cannot be against them,” he said.

Many African countries, which import Russian grain and energy while also buying Ukrainian grain and benefitting from Western aid flows and trade ties, have avoided taking sides over the war in Ukraine.

Uganda was among 17 African nations that abstained in a March vote on a United Nations resolution condemning the Russian invasion, which was supported by 141 countries out of 193.

Lavrov praised what he described as “the responsible and balanced position taken by Uganda and other African states”, accusing the West of displaying a colonial mindset by demanding that Africa adopt an anti-Russian stance.

This chimed with Museveni’s remarks, in which he drew heavily on historical events to explain his preference for staying on good terms with both Russia and the West.

“Whenever issues come up and some people want us to take positions against Russia, we say ‘but you people, these people have been with us for the last 100 years, how can we be automatically against them?'” Museveni said.

“We have even forgiven our former enemies, the colonialists, the ones who have colonised us, the ones who had actually taken slaves from here and who did bad things. We have forgiven them and we are working them,” he said.

Harking back to the Cold War, Museveni, who has been in power for 36 years, said that when asked if he was pro-West or pro-East he rejected the question as idiotic.

“I am pro-myself. And I deal with other people according to how they relate with my own interest,” he said.

From Uganda, he will head to Ethiopia, which has long been a stalwart ally of the West but has recently rowed with the United States over its conduct of a conflict in its northern region of Tigray.

Reporting by Isaac Kasamani in Entebbe and Alexander Winning in Johannesburg; Writing by Estelle Shirbon