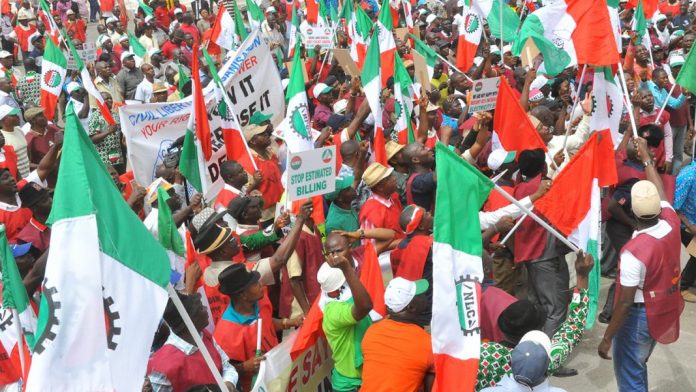 Scores of protesters on Tuesday stormed the Douglas House Owerri office of Imo State Governor, Hope Uzodimma over the prolonged strike action by the Academic Staff Union of Universities (ASUU).

This is even as Governor Hope Uzodimma of Imo State who was driving out of the premises declared support for workers saying he is in solidarity with Nigerian workers.

The governor bridged protocol, stepped out of his vehicle and danced to the union chants with the workers.

Addressing the crowd, Uzodimma said “I welcome you all to the government House Owerri. I’m also in solidarity with ASUU. The federal government can’t do anything against your interest. The federal government is not insensitive to the plight of ASUU. I call on you to look beyond protest, while you protest, I want you to think of ways to tamper justice with mercy. I will do my best to protect workers in Imo State and I urge you to support Federal Government policies”.

The Imo State Chairman of ASUU, Revd Philip Nwansi who addressed the governor called on the Federal Government to honour the agreement signed since 2009 and return students to school.

Nwansi said “We are not fighting the government, we are here in solidarity with ASUU as directed by our national leadership. We are here to demand the implementation of the agreement signed in 2009. It is time for Lecturers and students to return to the classrooms. The federal government should resolve her differences with ASUU and ensure quality education for our children”.

ASUU Chairperson for the Federal University of Technology Owerri (FUTO), Comrade Chinedu Ihejirika said the rally was to draw attention to the plight of Universities.

He said “Four associations in the university are on strike because we want better education for our students. The government should do everything to ensure students return to quality education and the time is now”.

His counterpart at the Imo State University, Comrade Odinakachukwu Ejiogu while speaking maintained that the IPPIS payment platform is fraught with several inconsistencies and was not designed for the university system. The authorities don’t need two weeks to solve the issues, you can do it within seconds. I call on the government to implement the agreement because no worker likes strikes.