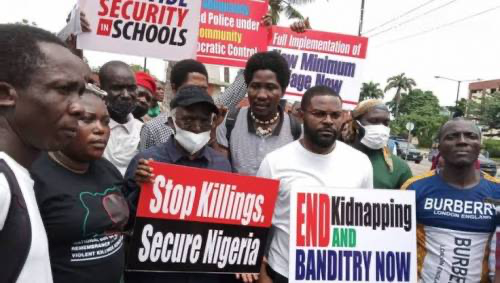 Top Nigerian Human rights lawyer, Femi Falana, SAN and his son on Tuesday joined the protest organised by the Nigeria Labour Congress (NLC) in solidarity with the striking Academic Staff Union of Universities (ASUU) which commenced in Lagos State

Naija247news reported that there was heavy presence of security operatives including policemen at the venue to prevent breach or attack on the protesters by thugs.

It was learnt that labour members, other unions, civil society groups gathered at under bridge axis in Ikeja.

The Nigerian Labour Congress (NLC) had on Monday called on members and civil society groups in Lagos State to come out massively on Tuesday morning to begin the two-day protest in solidarity with striking universities’ lecturers.

Meanwhile, security operatives have surrounded all critical infrastructure at the government house in Alausa, Lagos State.

However, as of the time of filing this report, the protesters are yet to reach the secretariat but security officials are on the ground to monitor the protest.

A police officer said the presence of the security operatives was to maintain law and order and not to harass protesters.