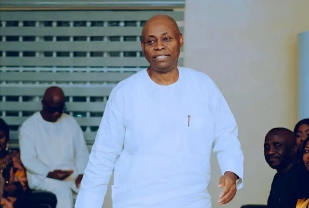 Adeleke is known to be one of the biggest supporters of the incoming governor of Osun.

Osun: No going back on my 5-point agenda – Adeleke

Immediately, he was declared governor-elect, Ademola went flat before his elder brother to show appreciation for his gesture towards him.

Speaking at the eighth convocation ceremony of his University, Adeleke charged young persons to be ambassadors of the society.

He also narrated some of the experiences in the society, saying some people were complicit in the problems of the country, especially on electoral rigging.

Adeleke disclosed the discussion he had with his younger brother, who emerged victorious in last week’s election.

“I told the governor-elect and his colleagues that you are lucky because you don’t have any godfather to refund any money to, so, whatever people contributed to your election is a sacrifice for a better Nigeria, for a better state.

“So, you and your colleagues are not under any pressure. The only thing you need to do out there is to go and serve the people. And I threatened them that I would be the first to call a press conference if I see things going wrong with his government.

“I will be the first to alert the world that your governor is derailing and I have told him and his team not to allow anyone that is not ready to serve; anyone that his focus is to come and look for money, to steal from the poor people, into the team.”

A total of 848 graduands, compromising masters, postgraduate, undergraduate and 28 doctorate students, graduated from the school.