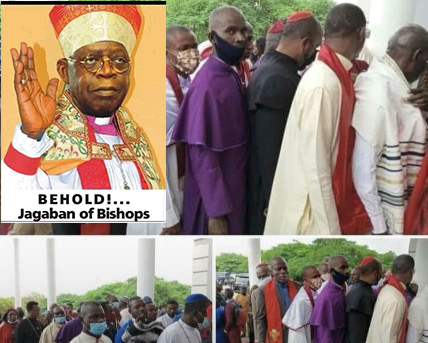 Naija247news recalled that following the criticisms that trailed the Muslim/Muslim ticket of Tinubu, the APC leader’s camp hired some Christians bishops to attend the formal unveiling of his Vice Presidential candidate, Senator Kashim Shettima.

The bishops who were in their robes were sighted at the event which is currently taking place at Shehu Musa Yaradua Centre, Abuja.

The incident had caused stir at the entrance of the event as the crowd taunted them and shouted “The bishops are here.”

Meanwhile the so-called bishops could not get seats at the main hall of the as they were seen being ushered to the gallery which served as overflow.

PDP described such move as unacceptable and unbecoming of any individual aspiring to a leadership position at any level let alone, the office of the President.

The party said, “The Peoples Democratic Party (PDP) is appalled by the nauseating, blasphemous and unpardonable act by the All Progressives Congress (APC) in hiring street artisans, fraudsters and touts and criminally dressing them in bishop’s vestments to orchestrate an endorsement for its collapsing Presidential campaign.

“The PDP, in the strongest term, condemns this profane and highly provocative act of desperation by the sinking APC Presidential Candidate, Tinubu, in the face of APC’s collapsing leadership, membership and followership structure across the country.

“Such action is unacceptable and unbecoming of any individual aspiring to a leadership position at any level let alone, the office of the President. This is an embarrassment to leadership.

“With this scandalous act, Tinubu, who is still battling with issues of alleged perjury, non-existent certificate and allegations of extortions has become more ethically challenged and lost all moral standing to seek election as the President of the Federal Republic of Nigeria.

“More sickening is the outcry by the hirelings that they were defrauded by agents of the APC Presidential candidate, who paid them sums ranging from N30,000 to N40,000 as against the N100,000 they were earlier promised.

“It is therefore ludicrous that instead of being remorseful and asking for forgiveness, the APC Presidential Campaign is shamelessly posting lame denials and excuses in the face of hard and verified evidence of its involvement in the shameless venture.

“With this ugly episode, Nigerians now know the individual who has been the planner and executor of the lies, false promises and corruption of the APC that have brought disunity, excruciating hardship, mass killings and political instability in the country in the last seven years.

“The APC Presidential candidate and his party should know that it is in his own interest to withdraw from the race as it will be futile to go into an election in which the will and aspiration of the people are manifestly against him and the APC.”